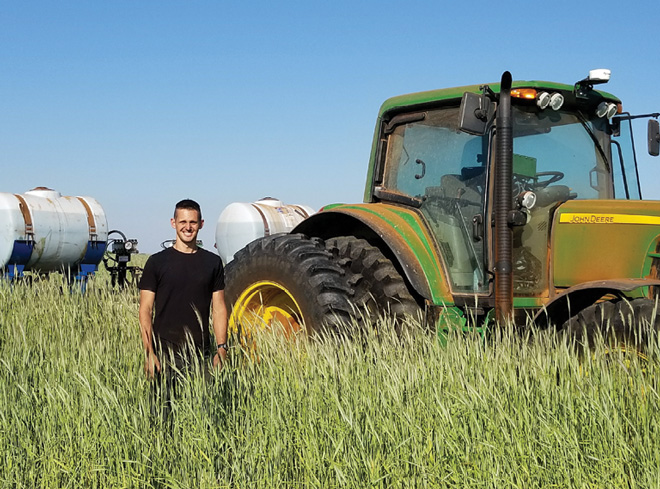 Pictured Above: GOING ALL IN. When Josh Payne switched to no-till and cover crops, he went all in, going straight to planting soybeans into green cereal rye. He uses a 6-row Kinze 3000 planter without coulters and sharp double disc openers

Josh Payne remembers the day he decided to switch from conventional tillage to no-tilling. The young farmer and his grandfather Charlie were in a shed one day in May 2013 on Charlie Payne’s farm near Concordia, Mo., working on machinery.

“A big thunderstorm came up and dumped 4 inches of rain on us in half an hour,” Josh recalls. “We watched from the shed as water broke over the top of terraces and tore downhill, taking soil and fertilizer with it. Grandpa said these rainstorms just keep coming harder and harder and that we were going to have to do something else to control that runoff.

“That gave me the green light to go out and research what we could change to farm differently,” he says.

Part of his challenge were variable spring weather patterns that could leave the land too wet to plant on a timely basis. On the other hand, average rainfalls approaching 39 inches and high temperatures in July and August of about 90 F offered potential for very good corn and soybean yields on this rolling farmland 60 miles east of Kansas City.

A big change in the operation came after Josh attended the 2014 National No-Tillage Conference in Springfield, Ill.

Premium content is for our Digital-only and Premium subscribers. A Print-only subscription doesn't qualify. Please purchase/upgrade a subscription with the Digital product to get access to all No-Till Farmer content and archives online. Learn more about the different versions and what is included.
KEYWORDS charlie payne Crustbuster green cover seed josh payne planting green SmartMix