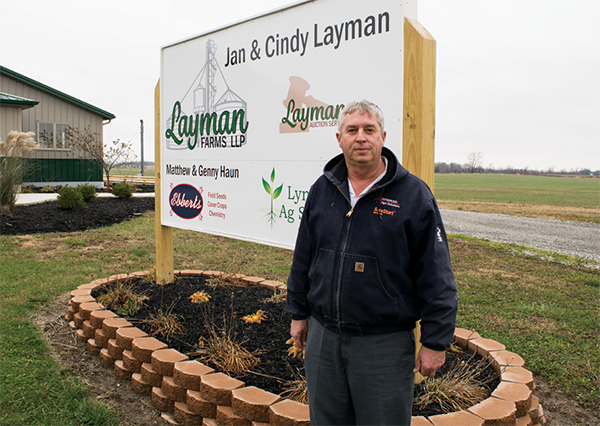 No-Till Pays Off, Dollar for Dollar

A long-term commitment to soil health and precision fertilizer use help Jan and Cindy Layman turn their no-till operation into a thriving enterprise.

It’s certainly possible to no-till high-yielding crops in northwest Ohio, but for Jan and Cindy Layman, it’s no cakewalk, either.

They farm some of the best and poorest soils in Hardin County and the terrain ranges from steep hilltops to flat bottomlands. Heavy spring rains can foul up planting. Crusting and slug pressure are always a threat. But through long-term, no-till practices, along with precision fertilizer application and timely investment in equipment and grain storage, the Laymans have expanded their operation to 4,800 acres.

They first no-tilled corn in 1984 and started committing more fully to the practice in 1988 when Jan saw his neighbor’s no-till soybeans survive a drought, while Jan’s conventional soybean crop didn’t even emerge. Another reason no-till looked more enticing was the labor savings he could realize as his farm expanded.

The Laymans became 100% no-till in 1994, as they traded in a Steiger tractor and 30-foot field cultivator for a John Deere 750 no-till drill. Their corn yields at the time averaged about 145 bushels, but yields are well over 200 bushels now in some of their better fields.

In addition to raising and selling cash grain, the Laymans own and operate enterprises for custom tiling and excavation.