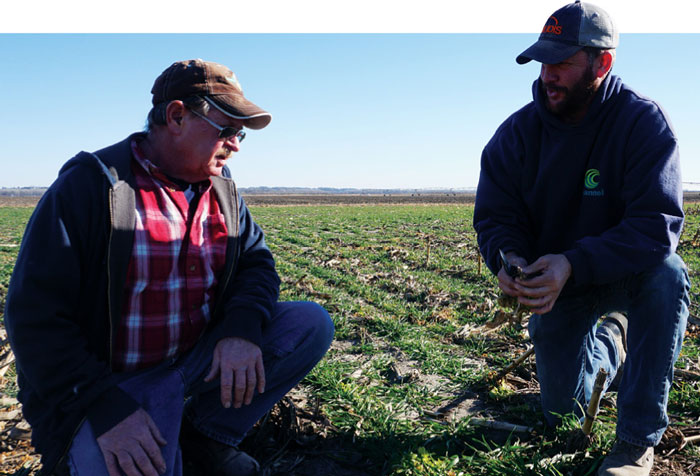 Pictured Above: STRIP-TILL SWAP. Brent Willnerd (left) and Kirk Brand began strip-tilling across all corn acres in 2014, turning the tables on notoriously heavy soils riddled with residue and compaction

Conventional wisdom is overrated for Nickerson, Neb., farmers Kirk Brand and Brent Willnerd, especially when it comes to getting the most out of their 2,600-acre corn and soybean operation.

After starting out of primarily no-tilling both corn and soybeans, they believed a better option existed to combat the heavy gumbo soil on many of their cornfields.

“We applied anhydrous at an angle across our soybean ground, so when we went to plant, there was a beautiful spot from the anhydrous knife to drop the seed,” Brand says. “But in between, we’d have mucky soil under a lot of residue. We couldn’t start planting early because we weren’t getting the seed slot closed properly.”

After some experimentation with ridge-till, Brand and Willnerd ultimately settled on strip-tilling corn after renting a strip-till bar to test the practice.

Impressed with the initial results, they fully transitioned to strip-tilling corn in 2014, while still no-tilling soybeans on most of their operation.

They’ve since settled on two Strip Cat row-unit toolbars — one running at 8 rows and the other at 12.

Pulling the weight for their operation are two Challenger Tractors, capable of maneuvering various rigs and planters.

“The fertility right under the corn roots has been exceptional…