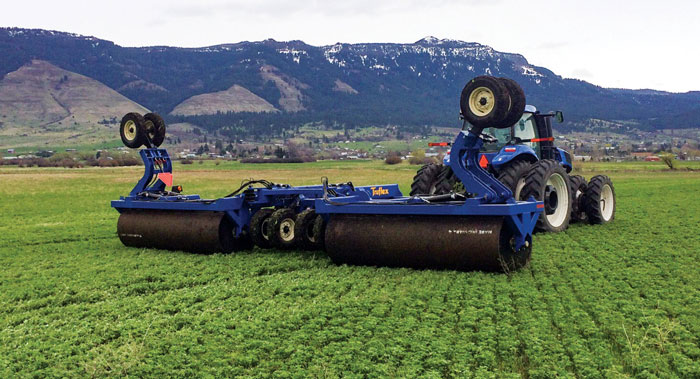 Land Rolling Can Drum Up Benefits, ROI for No-Tillers

By Laura Barrera posted on January 13, 2018 | Posted in Equipment

Pictured Above: BETTER SEEDBED. Cove, Ore., no-tiller Colby Johnson uses his TruFlex land roller to improve the seed-to-soil contact on his cereals, forage and hay crops, which has resulted in better rows and a more consistent stand. Without his land roller, Johnson estimates he’d lose anywhere from a quarter to a third of his alfalfa seed

If you ask Colby Johnson about his decision to invest in a land roller, he’ll tell you he wishes he had made the purchase sooner rather than later.

Located in Cove, Ore., Johnson is using his 3-section, 33-foot-wide TruFlex roller on almost every acre of his 3,800-acre operation, where he grows cereals for harvest, forage crops — mainly forage barley for hay — alfalfa and grass hay.

His purpose for land rolling is to improve seed-to-soil contact. After running a Great Plains Mfg. Turbo-Till vertical tillage bar in the spring to size residue and warm up the ground, he’ll land roll once or twice to firm up the soil, which he says creates a nice seedbed for him to drill into.

On some alfalfa and forage crops, he may let the crop come up before rolling it again to make a smooth, level surface for hay equipment.

It’s his alfalfa crop where he’s seen the greatest advantage to land rolling, including better seed rows and a more consistent stand. Even in established alfalfa, it’s proven beneficial in keeping the gopher mounds to a limit.

“I should’ve had a land roller years ago,” he says.

Premium content is for our Digital-only and Premium subscribers. A Print-only subscription doesn't qualify. Please purchase/upgrade a subscription with the Digital product to get access to all No-Till Farmer content and archives online. Learn more about the different versions and what is included.
KEYWORDS Land Rollers Rite Way shelbourne reynolds summers mfg TruFlex Turbo-Till

How No-Tillers Can Combat the Evolution of Herbicide Resistance