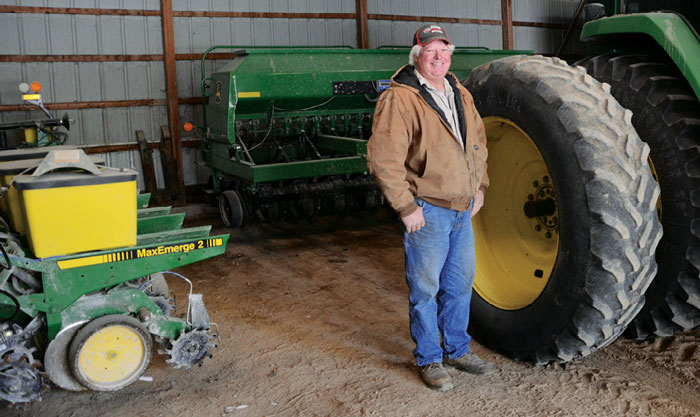 Iowa no-tiller uses his 30 years of experience, mechanical abilities to keep machinery in tip-top shape for his row crop and cattle operations.

Pictured Above: REBUILT IS BETTER. No-tiller Ray Menke loves to build things on his southeastern Iowa farm. Rebuilding equipment, such the John Deere 7200 corn planter on the left, enables Menke not only to save money, but to customize his machinery with the latest precision tools

Farmers, in general, are fairly good mechanics, which is necessary to avoid costly on-farm service calls for simple repairs.

Then there’s no-tiller Ray Menke of Fort Madison, Iowa. He relishes the challenge not only in keeping his older machinery functioning well, but of building new equipment from scratch.

Menke began farming with his father in 1981, a time frame he describes as one of the worst times to start farming.

By the mid-1980s, he was experimenting with no-tilling corn into soybean ground and beginning to see modest improvements in his soil health, with earthworms making a comeback and soil properties changing.

With a few years of no-till experience, Menke began considering leveling his fields that were still rough from years of deep furrows. He went to a couple of no-till conferences, asked about field leveling and the response was “absolutely not” because he would ruin the 3-4 years of progress already made in the soil structure.

“I couldn’t afford the big tractors, the big equipment for tillage,” he says. “No-till looked cheaper and easier to do, but mostly we got lucky because we had picked the right variety of seed corn. The variety that we were planting had good cold germination characteristics and it…