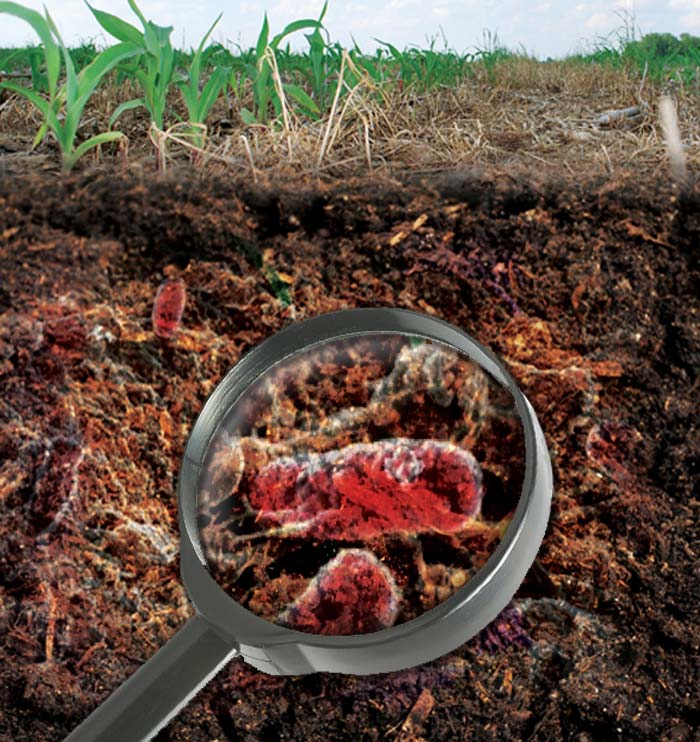 By Laura Barrera posted on January 13, 2018 | Posted in Soil Health

‘Beneficial’ may not be what no-tillers think of fungi, but arbuscular mycorrhizae fungi is capable of protecting and nourishing plants, leading to higher yields for less cost.

Just underneath the soil surface are thousands of microorganisms, playing an important role not only in the soil, but the success of the crops planted into them.

One type of species no-tillers are probably the most familiar with — and for good reason — is arbuscular mycorrhizae fungi (AMF). Benefits of the fungi include increased soil fertility, better soil structure and protection against disease and nematodes, to name a few.

At the 2017 National No-Tillage Conference, Wendy Taheri, microbial ecologist of Pelham, Ga.-based TerraNimbus, explained what AMF is and its benefits in agriculture, as well as what no-tillers can do to help it proliferate in their no-till fields.

While there are seven different kinds of mycorrhizal fungi, Taheri says AMF is the only kind grain producers need to be concerned about, as 90% of all plant families associate with AMF. Brassicas are one exception. (See, "Are Non-Mycorrhizal Plants Bad?".)

The plants that do associate with AMF will invite colonization of the fungi by sending out chemicals to attract it, Taheri explains. The plant prepares a path to the cells that are ready to receive arbuscules — the tree-shaped organ that AMF forms inside a plant’s roots. When a root is filled with arbuscules, it’s called a colonized root.

After an arbuscule is formed, the plant will create a membrane around it, which serves as the interface between the plant and the fungi, allowing the two to exchange nutrients and chemicals for communication.

This relationship between the…

Premium content is for our Digital-only and Premium subscribers. A Print-only subscription doesn't qualify. Please purchase/upgrade a subscription with the Digital product to get access to all No-Till Farmer content and archives online. Learn more about the different versions and what is included.
KEYWORDS arbuscular mcorrhizal fungi mycorrhizae roger koide terranimbus Wendy Taheri yiva lekberg

No-Till And Organic: Combination Has Its Challenges, Rewards