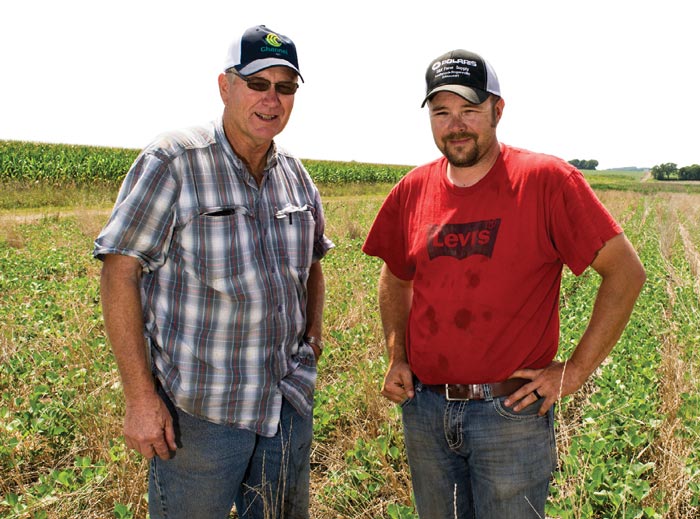 The Forkner family is bringing productivity back to gently rolling hills by adding livestock and seeding cover crops to build soil health.

Pictured Above: COVERED UP. Tim Forkner (left) and his son Nathan have pushed back erosion problems on the rolling hills they farm in northwest Missouri with the adoption of no-till practices and seeding of triticale, radish, oats and other cover crops after soybeans, corn and winter wheat

No-till adoption didn’t happen overnight for the Forkner family, but after several years of seeing positive results it’s not likely they’d ever go back to conventional tillage.

Soil organic matter and cation exchange capacities in their soils are increasing and doing so more rapidly than expected due to the addition of cover crops and livestock on their operation, they say. Even Tim Forkner’s 89-year-old father, Arch, is coming around.

“You have to get rid of all your tillage equipment because if you have it sitting there, you’ll use it.,” Tim says. “My Dad especially wanted to disc everything. But last fall, he kept insisting every field needed to be green all winter. That’s the first time he’s said that.”

Tim and his son, Nathan, no-till 4,500 acres of corn, soybeans and winter wheat near Richards in southwest Missouri. Five miles in either direction from their home farm is a river.

Their farm ground, in the natural basin between the rivers, “lays really nice,” Tim says.

Slopes range 1-2% in their area, but a few can reach 3-5%. There are also flat fields where water may run half a mile before it drains away, Tim says. Despite this relatively challenging terrain, 100%…

Premium content is for our Digital-only and Premium subscribers. A Print-only subscription doesn't qualify. Please purchase/upgrade a subscription with the Digital product to get access to all No-Till Farmer content and archives online. Learn more about the different versions and what is included.
KEYWORDS Ag Leader Flo-Rite grazing cover crops great plains spider wheels John Deere Planter Yetter SharkTooth