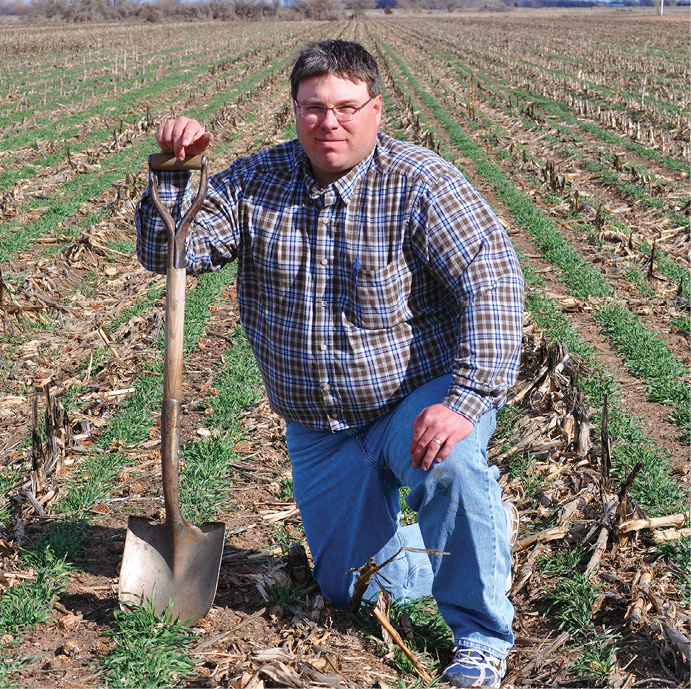 By Mark Parker posted on May 12, 2012 | Posted in Cover Crops, Nutrient Management

From conservation to higher yields to reduced fertilizer and herbicide use, cover crops brought an immediate payback for Jacob Farms.

Last summer, when high temperatures in south-central Kansas spiraled above 100 F for several weeks, the benefits of cover crops never seemed so real for no-tillers like Ryan Speer.

Dryland corn and soybeans that followed a cover-crop mix on Jacob Farms actually made a crop, when many farmers who use a conventional-tillage system watched their plants and profits burn up.

So for Speer, cover crops are a short-term difference maker with long-term potential.

“The cereal rye and radishes we plant ahead of soybeans have increased our yields by decreasing evaporative moisture loss, reducing weed pressure and recycling nutrients,” says Speer, who manages 3,800 acres near Sedgwick, Kan., with partners Steve and Terry Jacob. “The yield bump more than pays for the cost of planting the cover crops.

“But I think the big bang will come down the road with greater productivity due to increased organic matter and improved soil structure.”

Jacob Farms, established in 1896, has been a continuous no-till operation since 2003. In addition to commodity crops, the operation grows seed wheat and has a beef enterprise that includes a butcher beef business.

Prior to joining Jacob Farms, Speer was an agronomist at the Scott City co-op in western Kansas. He was hired by the Jacobs as farm manager in 2003 and joined them in an ownership role in 2007.

Cover crops became part of the no-till strategy in 2007 and in 2011, Jacob Farms planted 1,250 acres of cover crops. Due to drought conditions last…