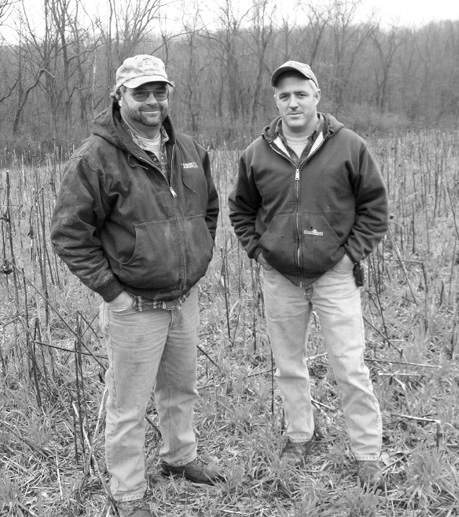 Just Get It Covered!

Jay and Rodney Arentz say it’s not so important what you use for cover crops, just that you use them.

When it comes to identifying the cover crop strategy that Arentz Hay & Grain has utilized in the last decade, it’s really quite simple.

“Whatever we’ve got available, we use it,” says Jay Arentz, who with his brothers Rodney and Craig and father Butch no-till around Littlestown, Pa., just 3 miles from the Maryland border.

Farming in an area with tight soils that hold a lot of moisture, they credit cover crops with helping them no-till more effectively by providing improved soil tilth.

The Arentzs use a diverse rotation consisting of corn, full-season and double-crop soybeans, wheat, barley and hay. But it wasn’t until they began using cover crops that no-till conditions improved.

“We’re finding that it helps take up excess moisture in the spring and then, after you kill it, the cover provides a nice mat to help hold moisture through the summer when we’re dry,” Jay says. “It has been loosening the soil for us and we have gained quite a bit of organic matter.

“Our soils are more mealy.”

Drilling a cover crop into winter wheat stubble has provided the Arentzs with the best rotational fit to date. They typically rotate back into corn the next spring.

They’ve caught the attention of locals with some of their mixes, including drilling sunflower seed the local hardware store sells for bird food. They’ve implemented one seven-way mix that includes sunflowers, buckwheat, hairy vetch, cereal rye, two types of clover and chickory.

“We did it for deer…

Premium content is for our Digital-only and Premium subscribers. A Print-only subscription doesn't qualify. Please purchase/upgrade a subscription with the Digital product to get access to all No-Till Farmer content and archives online. Learn more about the different versions and what is included.
KEYWORDS Cover crops drilling moisture nitrogen fixing residue rotations soil tilth Wheat

It Isn’t Just Not Tilling: It’s The System

No-Till And Cover Crops — Just Rolling With It

Get Up And Get Growing