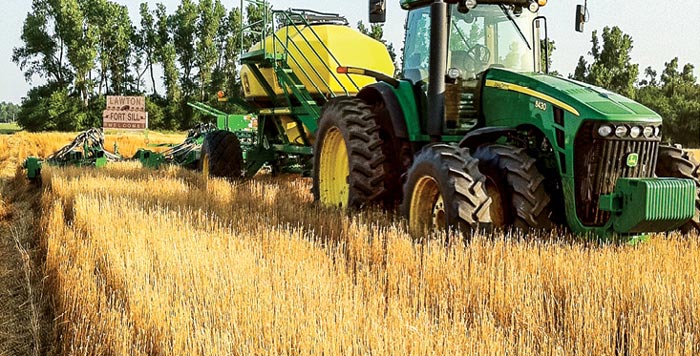 By John Dobberstein posted on November 18, 2017

With a soil armor of residue, better water infiltration and diverse crops, Alan Mindemann is making no-till work in the most challenging of conditions.

Pictured Above: DOUBLING UP. Apache, Okla., no-tiller Alan Mindemann double-crops mung beans after small grains in the summertime and has had good success, noting the crop grows quickly and yields well with timely rains, but still provides decnt returns if conditions are dry

The weather can be very erratic for Alan Mindemann, but he finds a way to turn that variability into profitability.

Average yearly rainfall for his farm near Apache in southwestern Oklahoma is about 32 inches, but can range anywhere from 16-50 inches in just a year or two.

Summers tend to be scorching hot and dry. Pan evaporation averages about 60 inches a year and can easily go up to 100 inches during major drought periods, such as the one that occurred in 2011.

With plenty of frost-free days, Mindemann’s growing season is long enough that he can easily grow two crops a year, and nearly everything can be planted early or late.

Despite that, he typically doesn’t have a set crop rotation, as precipitation and soil moisture often dictates what he can raise. He farms about 3,000 acres and plants 5,000 acres annually. To date, he’s raised corn, soybeans, winter and soft red winter wheat, sesame, grain sorghum (milo), winter canola, pearl and foxtail millet, cowpeas, okra and mung beans.

Cover crops and forage crops can be raised just about the entire year, and he also raises non-GMO soybeans and mung beans for seed. “I got the reputation of being able to grow about anything. I’ll…