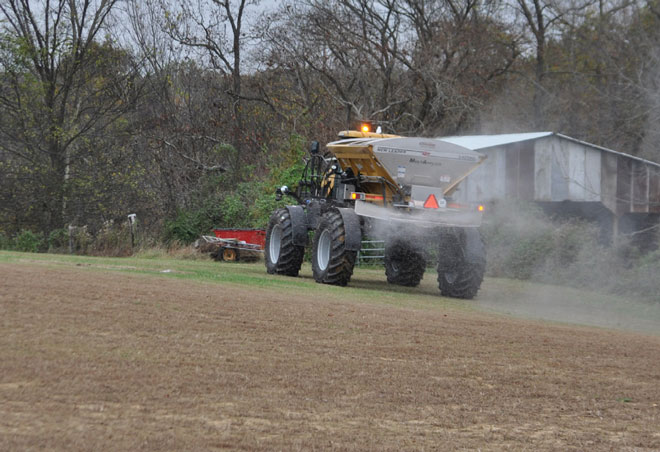 By John Dobberstein posted on October 28, 2017 | Posted in Crop Protection, Nutrient Management, Soil Health
Pictured Above: ON THE SURFACE. Soil fertility expert Neal Kinsey says it’s best for no-tillers to broadcast sulfur rather than placing it in furrow, as adding too much sulfur can interfere with phosphorus (P) uptake. Excess P can also hinder sulfur uptake, he says

It might be easy for some no-tillers to dismiss the importance of sulfur in their farm’s fertility program, given all the attention paid by agronomists, researchers and marketers to the ‘big three’ of nitrogen (N), phosphorus (P) and potassium (K).

But the way Neal Kinsey sees it, many no-tillers are selling their plants, and yield potential, short by listening too much to fertilizer dealers and other experts who say sulfur isn’t needed or will take too long to be effective.

The soil fertility expert told attendees at the National No-Tillage Conference last January that ensuring proper sulfur levels should be the highest priority after N, P and K are brought in line. “Sulfur is the missing link,” to better plant health and yields, he says.

Why Sulfur is Needed

Sulfur deficiencies are increasing, Kinsey says, because crop yields are being pushed higher and higher. High-sulfur coal has been eliminated from the Midwest, as well, which means far less of the nutrient is being deposited in the soil during precipitation events. And less sulfur is being included incidentally in fertilizers.

Kinsey shares several reasons why sulfur is essential to corn, soybeans, wheat and other crops:

Here’s What the Research Says About Managing Sulfur in Soybeans

Evaluating the Need for Sulfur in High Organic Matter Soils