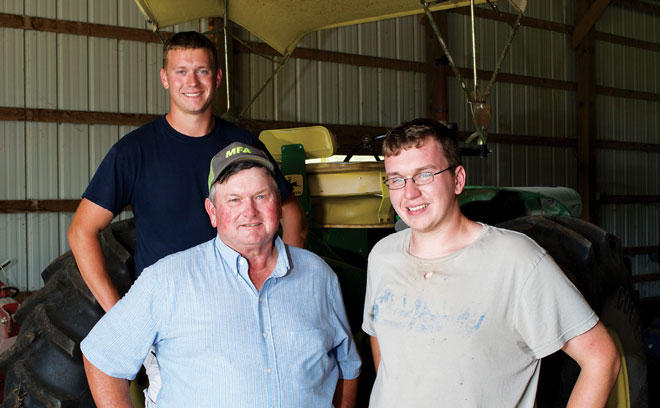 No-Till Benefits Add Up to Dollars and ‘Sense’

The Willis family has seen double-digit yield increases, healthier soils and reduced erosion after 30-plus years of no-tilling and covers.

Pictured Above: NO-TILL MOXY. More than 30 years of no-till practices, along with the addition of cover crops 4 years ago, has slowed erosion, increased corn and soybean yields and improved nutrient-use efficiency for Ron Willis and his sons Michael (top) and Matthew, who farm 1,500 acres near King City, Mo

Every farm faces at least some challenges adopting no-till practices. But when it comes to sticking with the practice, Ron Willis’ feelings on the matter are pretty clear.

Farming with his sons Michael and Matthew, Ron credits 32 years of continuous no-till for slowing down soil erosion and rebuilding soil tilth on their hilly, sloping 1,500-acre farm in northwest Missouri. Adding cover crops to the equation is speeding up the regeneration of soil organic matter, fortifying terraces, reducing fertilizer costs and helping to control weeds.

“You have a different weed control with no-till compared to tillage. But I’d just as soon take a beating as I would till the ground,” Ron says.

The Willises no-till corn, soybeans, wheat and hay near King City, Mo., and manage a 120-head Angus cow-calf operation, grazing grass pasture, hay and cover crops. In addition to seeding cereal rye as both a cover crop and for their own seed, they’re also using multi-species cover crop mixes, mostly behind wheat.

Their journey to no-till started in 1986 as they took advantage of a federal program that paid them to no-till 40 acres. Liking what they saw, the following year they purchased a no-till…