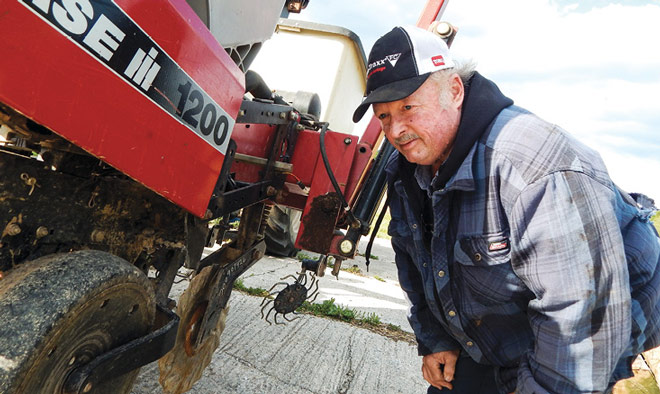 Tim Weiser accesses highly erodible, sloping acres with no-till that would have otherwise been unfarmable with tillage — realizing cost savings in the process.

Pictured Above: STEEL-EATING SOIL. No-tiller Tim Weiser, who farms around 300 acres in York Springs, Pa., did away with the chisel plow 30 years ago to capitalize on the labor, time, wearable parts and fuel savings offered by no-tilling. Working his gravelly soils is hard on any steel that touches the ground, he says. Inspecting his Case IH 1200 row units, he points out that the coulters were brand new 120 acres ago and are already “almost shot.”

IN TIM WEISER’S part of Pennsylvania, farming efficiently is a perpetual battle with the existing condition and topography of the land.

“We’ve got a lot of tough, conglomerate-type soils and red shale. I remember watching my dad shoot sparks all across the field when he was plowing out an old orchard,” says Weiser. “He had to change the points on the plow by noon the same day. It’s good corn ground, but it eats steel.”

Weiser, who downsized the family farm from around 1,000 to 300 acres recently, has been no-tilling a corn/soybean rotation for 30 years. He also maintains 20 acres of vegetables and 100 orchard acres. He jokes that the switch to no-till was originally the work of an aggressive ag extension agent, but the economics and necessity of the strategy soon became indispensable to his family’s operation.

Premium content is for our Digital-only and Premium subscribers. A Print-only subscription doesn't qualify. Please purchase/upgrade a subscription with the Digital product to get access to all No-Till Farmer content and archives online. Learn more about the different versions and what is included.
KEYWORDS apple orchard chesapeake watershed Corn erodible soil sloping terrain soybean tim weiser vegetables