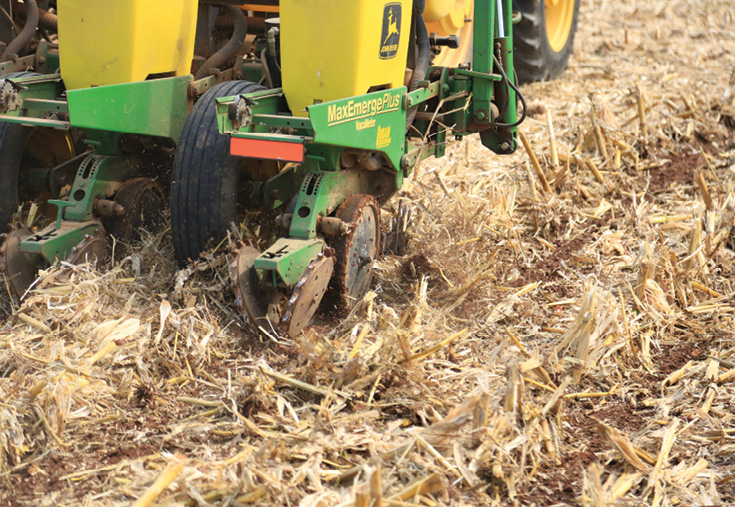 By Laura Barrera posted on March 1, 2014 | Posted in Cover Crops

No-tillers with a rotation that typically includes winter wheat might consider trying winter canola due to its higher prices, benefit to soybean yields and ability to loosen up the soil.

Growers double-cropping the oilseed with soybeans are receiving higher prices than with wheat and seeing yield bumps in their following soybean crop — resulting in up to $150 more per acre in profits for some.

Other advantages to winter canola include being a nonhost crop for soybean cyst nematodes (SCN), which ties into the fact that adding the crop to the rotation helps break up many common weeds and diseases of winter wheat, such as ryegrass and Fusarium head scab.

In areas like the Great Plains where winter wheat is the principle crop, winter canola is being used to eliminate the monoculture of wheat.

While no-tilling winter canola can be a challenge, growers successful with residue management can have great results with the system, especially because of no-till’s time- and moisture-saving benefits.

Price Points. In Carnesville, Ga., about 60 miles northeast of Atlanta, Mark Ariail is no-tilling 160 acres of winter canola on his 700-acre farm. The majority of it follows corn. In the summer, he’ll double-crop soybeans. This year is his sixth canola crop.

After having success with winter canola in the past, Ariail decided to start producing it when a crusher was built in his area. Like many other no-tillers, he’s seen a price advantage with the crop. Used for its oil, it sells around $11 per bushel, which…

Will Winter Wheat Work As A Cover Crop?

Is a Fungicide Needed at Herbicide Timing in Winter Wheat?