SPENDING TENS of thousands of dollars on an air seeder to seed cover crops didn’t make sense for Jeremy Henry, as he no-tills corn and soybeans on only 360 acres.

Past aerial applications that cost $15-20 an acre had produced spotty results and after the plane was forced to make turns over schools and subdivisions near Connersville, Ind., someone reported the pilot to police.

A machinist by trade, Henry went to work in his shop and designed small seeders out of dry-fertilizer boxes that allow him to seed cover crops during harvest on both his corn and soybean headers.

Henry started off the project by locating and buying dry fertilizer boxes from a John Deere corn planter.

On his soybean header, Henry bolted them onto the header with half-inch bolts. A drop tube from the box and a fan below helps distribute the seed. The setup is ground driven and he’s able to drop the same amount of seed regardless of the harvest speed.

The seeder on his corn header — which he also built in his shop — is hydraulically driven from the combine, but he can control distribution from the cab. He also set everything up so when he has to raise the corn head up or down the seeder shuts off automatically. 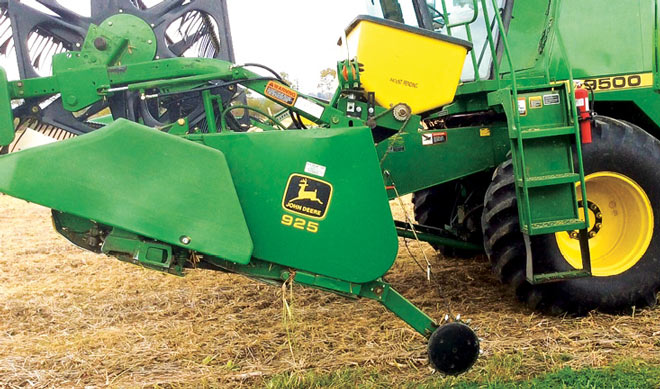 GROUNDED COVER. In this soybean header setup, Jeremy Henry is using a ground-driven system with the seeder box to deliver annual ryegrass and crimson clover during harvest in no-till soybean fields going…

Premium content is for our Digital-only and Premium subscribers. A Print-only subscription doesn't qualify. Please purchase/upgrade a subscription with the Digital product to get access to all No-Till Farmer content and archives online. Learn more about the different versions and what is included.
KEYWORDS air seeder corn header dry fertilizer box jeremy henry seeding cover during harvest soybean header Yield bump