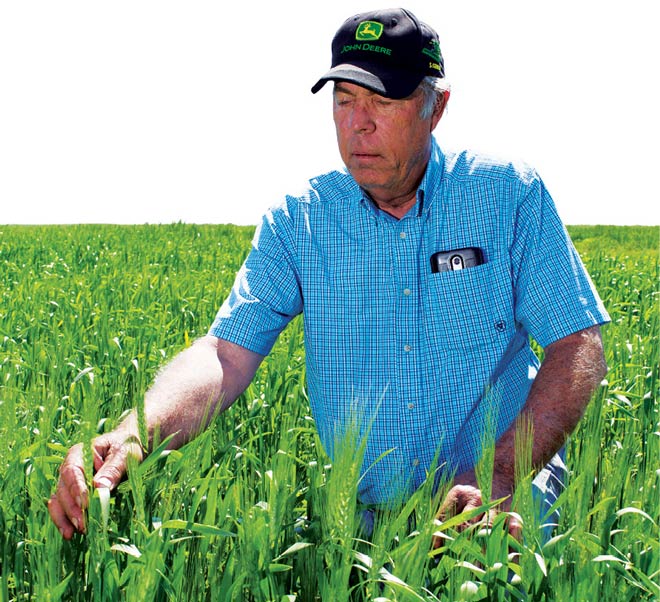 Measured fertilizer applications, copious amounts of residue and dogged determination have all helped Leon Sowers improve the diversity and viability of his Kansas operation.

Pictured Above: MORE VIABLE. Leon Sowers says adopting no-till practices 18 years ago allowed him to grow a more diverse rotation, which now includes corn, soybeans, winter wheat and milo, as well as specialty crops like sunflowers, canola and sesame. Although prices aren’t very good, he keeps wheat in his rotation because it produces plentiful residue to protect his soils from the elements

THERE WAS A time when Leon Sowers felt killing weeds and preparing a seedbed were logical reasons to till fields. But in his family’s case, he eventually realized that approach wasn’t working.

“We were killing the weeds, but tearing up the best seedbed we had, and we’d work all summer to work it back down to have the seedbed we started with,” he recalls.

After going to a farm tour hosted by Dakota Lakes Farm manager Dwayne Beck 18 years ago in South Dakota, Sowers came home with a different outlook. His big Versatile tractor and other tillage equipment was sold off and the money was used to switch out his John Deere 455 drill, which he says produced mediocre no-till stands, for a Deere 750 no-till drill.

“That was when I decided if they could do it, I could do it,” he says. “No-till is as much a state of mind as it is a farming practice.”

Sowers no-tills a wide variety of cash crops on 3,700 acres near Murdock in central Kansas, and grazes 85 head of cows on 700 acres of grass.