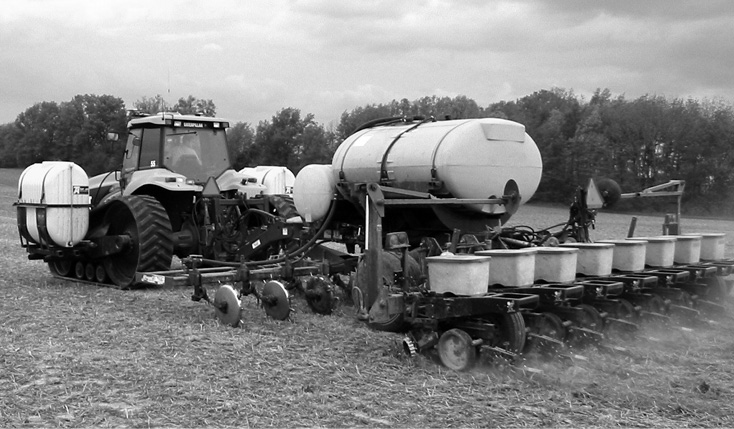 Equipment upgrades and expert advice are pushing this no-tiller’s fields to produce to their full capacity.

A multipurpose tool hooked to your belt is handy, but one trailing behind your tractor is even better.

Joel Armistead rolled into his soon-to-be corn fields this spring with an eight-row Kinze no-till planter he configured to minimize waste, maximize yield and keep his no-till options open.

Among the arsenal of tools the planter features are Precision Planting seed meters, TruCount row clutches on every row unit and a caddy system that allows Armistead to put down 32% nitrogen alongside the row during the no-till planting pass.

While an RTK AutoFarm system may have Armistead coasting through planting, this farmer isn’t on cruise control when it comes to management. The Adairville, Ky., no-tiller’s use of available machinery and crop experts, precision equipment and his own past experiences have placed him at the very peak of Kentucky corn growers.

“Last year, we harvested 305.9-bushel no-till corn under an irrigation pivot,” Armistead says. “That was the highest yield ever recorded in the state of Kentucky for any type of corn production.”

The feat earned him the top award in the Kentucky Corn Grower’s Yield Contest, but Armistead says he can do better.

“When we harvested the rest of the field, we found a spot that went several bushels past 305, so now we know where the sweet spot is. That’s where we put the yield plot this year,” Armistead says.

To further tip the odds in his favor, he upped his seed population to 41,000 in 30-inch rows in that field and…

Premium content is for our Digital-only and Premium subscribers. A Print-only subscription doesn't qualify. Please purchase/upgrade a subscription with the Digital product to get access to all No-Till Farmer content and archives online. Learn more about the different versions and what is included.
KEYWORDS Corn coulters planter Precision Precision Planting seed seed meters Variable-rate yield