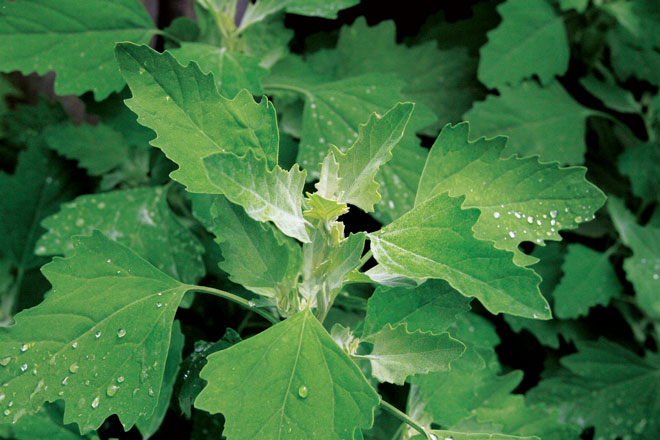 Halt Emergence to Wipe Out Lambsquarters

By Laura Barrera posted on June 10, 2017 | Posted in Crop Protection

While its seed bank can survive for years, pre-emergence applications and leaving seeds vulnerable to predation can keep this weed under control.

Pictured Above: LOOK FOR ‘FROSTING.’ One physical characteristic of common lambsquarters is the waxy, granular, white substance that develops on the tops of the leaves.

It's one of the oldest and most common broadleaf weed problems in the Corn Belt, and if left uncontrolled, lambsquarters can ding corn and soybean yields by at least 25%, says Bill Curran.

But as long as growers are proactive in their management and take action early, it’s usually one of the easier weeds to manage, the Penn State weed scientist adds.

Emerging as a tiny seedling with pale green leaves, Curran says lambsquarters looks a lot like pigweed coming out of the ground until it develops its first true leaves. But one of the main differences is that lambsquarters emerges earlier than pigweed, usually around mid April for the central Corn Belt.

Additional characteristics include a purple coloring on the underside of the leaves, while a waxy, white, granular substance will form on the top of the leaves.

Like pigweed, lambsquarters can grow quickly — reaching 4-5 feet tall — and is a prolific seed producer, capable of producing up to…

Premium content is for our Digital-only and Premium subscribers. A Print-only subscription doesn't qualify. Please purchase/upgrade a subscription with the Digital product to get access to all No-Till Farmer content and archives online. Learn more about the different versions and what is included.
KEYWORDS corn herbicide herbicide resistance lambsquarter Pigweed pre-emergence herbicide soybean herbicides weed resistance Weed Seedbank

8 Ways To Wipe Away Weeds