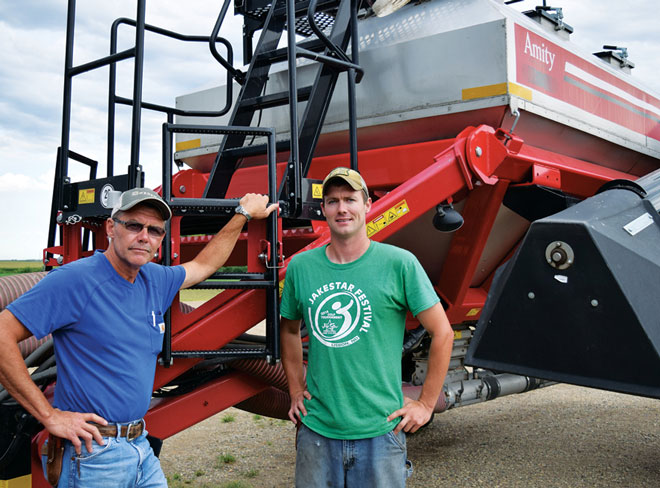 Pictured Above: BRAND SWITCH. Doug Rotenberger (left) and his son, Steve, made the switch from a Case IH SDX air seeder to this Amity 3800 to seed spring wheat, soybeans and a cover-crop mix consisting of oats, turnips and radishes. Doug says they don’t see the hairpinning issues they had with the Case IH air seeder and 15-inch soybean stands have also improved

The Rotenberger family is finding that more than two decades of reduced tillage is helping them improve soil tilth and organic matter, stabilize yields and reduce labor requirements to help their operation function more efficiently and profitably.

Doug Rotenberger, his father Charles and his son Steve, no-till and strip-till corn, soybeans and spring wheat on 3,500 acres near Lisbon, N.D., in a zone that sees 15-18 inches of precipitation annually.

Their rotation used to include more small grains like winter wheat and barley, but the trend in their area has shifted toward adding corn and soybean acres, Doug says.

The family tried no-tilling soybeans in the late 1980s but stopped because they didn’t feel there were enough options for herbicides to control weeds. As herbicide and equipment options improved in subsequent years they returned to no-tilling, using a single-disc Case SDX drill to no-till winter wheat after spring wheat.

“I guess I was looking for something to reduce time or workload,” Doug says, noting his 78-year-old father still runs the combine and handles other miscellaneous tasks on the farm.

The Rotenbergers believe their long-term switch to no-till…