Despite an abundance of residue and 3 million gallons of liquid cattle manure to inject, the Meiers are seeing success with no-till and learning how to add cover crops to the system.

Huey Meier admits that before committing to no-till, he couldn’t have cared less about growing corn.

Running a cattle operation of about 1,100 head in Dakota, Ill., the first thing Huey had his son, Matthew, take over when he returned from college in 2002 was the farm’s 500-plus acres of continuous corn.

Matthew became interested in no-till after seeing a YouTube video that showed water running off a conventionally tilled field, while a no-till field next to it had no runoff. He says their area misses a lot of rains and he wanted to increase their soil’s water infiltration.

So Huey attended the National No-Tillage Conference in Cincinnati in January 2015 to learn more about the practice and returned with a determination to make no-till — and cover crops — work.

“It’s like I went through a religious revival or something,” he says. “Now it’s all about the soil health.”

The Meiers dove into no-till 100% that spring. Matthew planted the corn with a used White planter they refurbished. 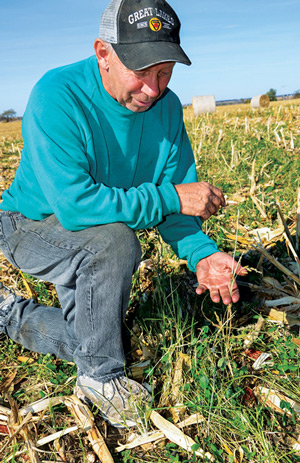 TRIAL AND ERROR. Huey Meier examines a field seeded with annual ryegrass and crimson clover in 2015. While Huey and his son, Matthew, didn’t…

Premium content is for our Digital-only and Premium subscribers. A Print-only subscription doesn't qualify. Please purchase/upgrade a subscription with the Digital product to get access to all No-Till Farmer content and archives online. Learn more about the different versions and what is included.
KEYWORDS Continuous corn coulter till huey meier injecting manure interseeding covers matthew meier no-till transition White planter