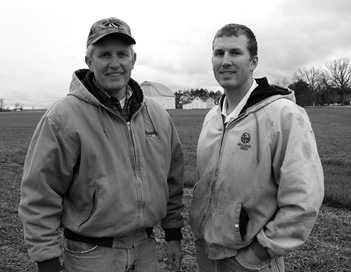 Fewer tractor hours and inputs help ease farm transition from one generation to the next.

Chris Rodabaugh discovered an extremely effective way to drastically cut his hours in the tractor — by passing the no-till torch to his son, Clint.

After graduating in 2006 with an ag business degree from Ohio State, Clint bought an 80-acre farm across the road from his parents’ Dunkirk, Ohio, farm. But getting started in farming is no walk in the park, so Clint also went to work for a local seed company and, in 2009, started a new job with Ag Credit.

It’s a work ethic that will serve him well as he works to take on his father’s 450 acres of no-till corn, soybeans and wheat.

Chris originally bought the farm, which included a farrow-to-finish hog operation, from his uncles in the late ‘70s. Over the years, Chris has implemented no-till and has installed filter strips, planted trees and protected waterways.

One appeal of no-till was the economics.

“We’d been doing a lot of deep ripping of the soil when I first got interested in no-till,” Chris says. “We saw some benefits in terms of drainage, but the economics of no-till was better. It meant not having to buy bigger tractors and spending less money on fuel.”

Today, the main tractor on the farm is Chris’ original 135-horsepower 1979 rig. He says, ironically, that he had to buy a bigger tractor to…

Grid Sampling Saved Years Of No-Till From The Chisel Plow