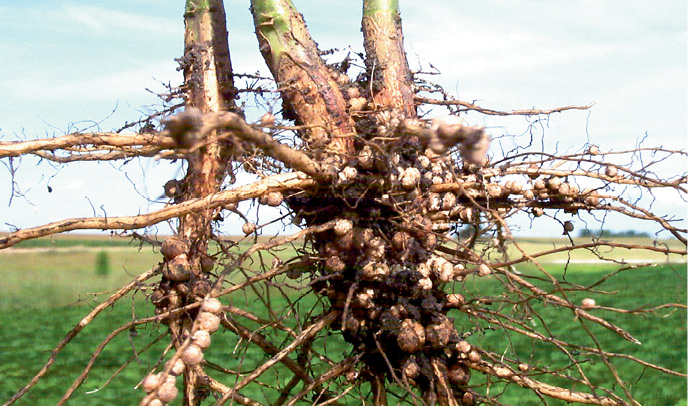 Yield increases may seem small, but so is the cost of inoculation, requiring a half-bushel yield response before hitting a payout.

First commercialized in 1898, nitrogen-fixing inoculants are the oldest crop input product still on the market today.

But is being the oldest crop input an indication it’s time to set this input aside for newer, better technology? Not a chance, says Garry Hnatowich, Novozymes Biologicals senior research agronomist.

“Inoculants really didn’t change much for 100 years, but in the last 10, we’ve seen an evolution thanks to scientific advancements in areas such as molecular biology,” Hnatowich says.

“I’ve tested every product out there and they’re all good,” says Ed Winkle, Ohio no-tiller and owner of HyMark Consulting. “The main thing Grandpa taught me was to inoculate legumes. Since the USDA introduced a new strain of inoculants in 1994, they enhance the soybean even more.

“Anybody who doesn’t inoculate is losing 2 to 3 bushels per acre.”

Even with improvements, however, producers may not be able to initially see the payout for inoculation.

Yield response from inoculation amounts to barely a blip on the yield monitor most years and almost never nears double digits. That may cause no-tillers to think inoculants don’t pay. But, according to university data, the profits can add up, especially over more than one growing season.

North Dakota State University reports an average increase of 2.7 bushels per acre from 6 years of inoculation product evaluations. Yearly averages range from a 0.5-bushel loss to…

Premium content is for our Digital-only and Premium subscribers. A Print-only subscription doesn't qualify. Please purchase/upgrade a subscription with the Digital product to get access to all No-Till Farmer content and archives online. Learn more about the different versions and what is included.
KEYWORDS bacteria inoculants inoculation nitrogen fixation seed treatments Soil health soybean yields