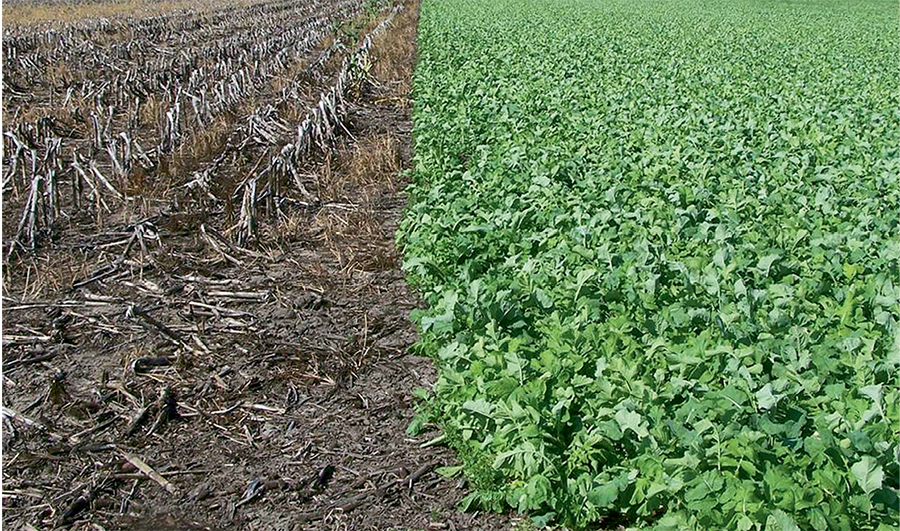 By Mark Parker posted on November 1, 2009 | Posted in Cover Crops

Fertilizing a cover crop tailored to meet your cropping strategy could provide the majority of your following cash crop's nutrient needs.

The more Jim Millar works with cover crops, the more credit he’s willing to give them — credit for soil building, nutrient recycling, water infiltration and the nitrogen credit for the following crop.

A former NRCS soil scientist operating Precision Soil Management at Redfield, S.D., Millar has analyzed clippings of cover crop biomass to determine nitrogen content. With good growth, 100 pounds of nitrogen is a good benchmark for the cover he’s planting after wheat, he says.

With a carbon-to-nitrogen ratio similar to soybeans, he has allowed a 50% nitrogen credit for the following corn crop, but he’s considering upping that to 75% because of the impact his cover crops have had.

“Obviously, you have to use some common sense,” he says. “If I’ve only got 6 to 10 inches of growth out there, then, no, I’m not going to call that 100 pounds of nitrogen. If I’ve had a good, thick cover crop that’s gotten up to 2 feet tall, then, yes, I’d say there is 100 pounds of nitrogen in that biomass.

“In the past, we’ve been crediting half of that for the next crop, but I’m convinced that’s not enough — I’m strongly leaning toward 75%.”

Millar is so impressed with cover crop performance, he’s now advocating fertilizing the cover crop itself.

“I’ve become convinced that a good cover crop offers enough potential benefits that we may need to fertilize it specifically to maximize that benefit,” he asserts, explaining that if 50 pounds of…

Premium content is for our Digital-only and Premium subscribers. A Print-only subscription doesn't qualify. Please purchase/upgrade a subscription with the Digital product to get access to all No-Till Farmer content and archives online. Learn more about the different versions and what is included.
KEYWORDS biomass canola Cover-crop Cover-crop mix fertilizer lentils nitrogen nutrient Radishes residue Wheat Winter