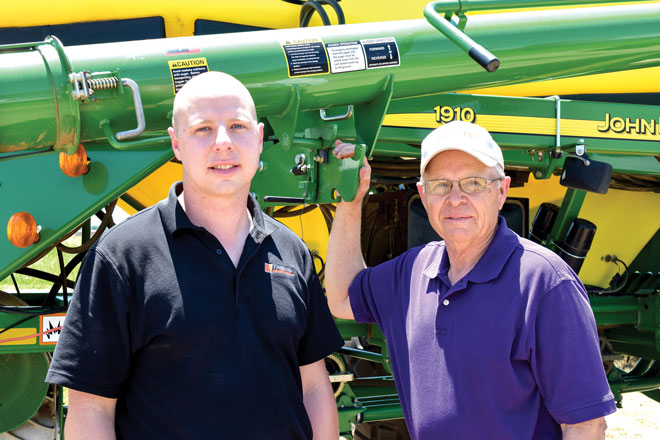 Pictured Above: SUCCESSFUL SWITCH. Darren Nelson (left) and his father, Jim, started no-tilling in 1999 to save moisture and reduce the risk of crop failure, navigating through many challenges along the way on their 2,000-acre operation near Hutchinson, Kan

Adopting no-till practices on any farm can produce a formidable learning curve, and that was no different for Darren Nelson and his father, Jim.

Feeling their farm was more vulnerable to drought and crop failure during the 1990s, they took encouragement from an innovative no-tiller next door and worked through equipment issues, crop failures, lack of local knowledge about no-till and some lean financial times to build a successful no-till operation in central Kansas.

“We’ve had a big reduction in risk for crop failure, and soybeans have been profitable of late, and that would be frightening to do with conventional tillage,” Darren says. “Moisture retention is the biggest part of it, as we’re not disturbing the soil and we have better soil health.

“And once we made our nutrients available as well, the whole thing worked. The idea we often hear is that it will take a few years for no-till to work. In my experience, if you get nutrient availability right the first year, no-till works the first year. You don’t have to put up with that lag.”

Darren and Jim no-till about 2,000 acres of winter wheat, double-cropped and full-season soybeans, grain sorghum (milo) and some corn near Hutchinson, Kan.

Their rotation is typically 2 years of…

Sticking with the Program Rings in No-Till Success