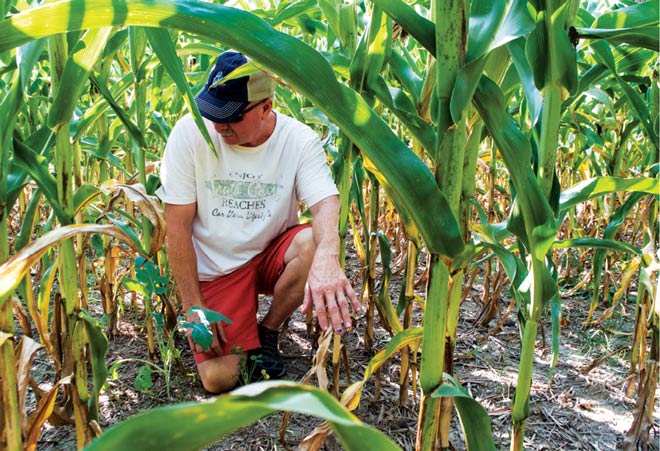 Despite his location, Doug Rogers has tackled no-till, twin rows, cover crops, controlled traffic and efficient fertility practices in an effort to leave his Ontario farm in better shape.

Pictured Above: EARLY START. Doug Rogers examines the cover crops he interseeded into corn around the V4-V6 stage last summer. Despite a dry spell, most of the cover on his heavier ground emerged. In his 2 years of interseeding, Rogers has been pleased with the results he’s seen from interseeding into corn, but is still working on getting a better stand in soybeans

Doug Rogers believes the toughest challenge growers have to overcome to make no-till a success lies not out in the field, but between the ears.

“To switch your mindset is tough,” he admits.

But Rogers has never shied away from learning from others and trying new practices on his farm.

In addition to moving from conventional tillage to a complete no-till system, he’s implemented twin-row planting, cover crops, controlled traffic and a complete liquid fertility program in pursuit of improving the bottom line on his corn, soybean and wheat farm near Lambton Shores, Ontario.

Rogers’ journey to no-till started with adopting ridge-till practices in 1990. He says it was the only way he could get his father to convert from conventional practices.

“It took him a lot of years to really, fully believe in no-till,” Rogers says. “And then once we saw some cost savings and one less tractor and three or four pieces of equipment, it all started to make sense in a hurry.”

The farm was about 50/50 ridge-till and no-till until around 2000, when they moved away from ridges completely. He…

Premium content is for our Digital-only and Premium subscribers. A Print-only subscription doesn't qualify. Please purchase/upgrade a subscription with the Digital product to get access to all No-Till Farmer content and archives online. Learn more about the different versions and what is included.
KEYWORDS AgroLiquid doug rogers Great Plains interseeding cover crops liquid fertilizer Ontario planting green twin rows