Corn remained the top crop grown by readers in 2016, but small grains started to pick up acreage, particularly in regions outside the Corn Belt.

No-tillers remained consistent in their crop acreage in 2016 as they did in 2015, with the amount of corn and soybeans slightly dipping as small grain acres increased.

Corn was still the top crop grown among readers who participated in the 9th annual No-Till Operational Benchmark Study, but it dropped 1 percentage point to 39% in 2016. Soybeans also dropped 1 point to 34%, while small grains rose 2 points to 16% last year. (See Figure 1.)

As for the percent of no-tillers who raised these three crops, 92% grew corn in 2016, 4 percentage points less than the 96% in 2015. The percent of readers growing soybeans also dropped about 2 points to 89%, while those growing small grains remained unchanged at 57%.

When broken out by region, small grains and soybeans seemed to pick up in the regions outside of the Corn Belt, while corn acreage fell in those areas. Here’s what changed for each region: 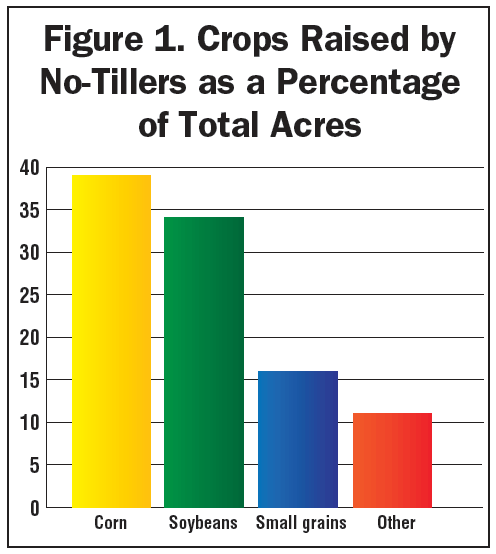 Premium content is for our Digital-only and Premium subscribers. A Print-only subscription doesn't qualify. Please purchase/upgrade a subscription with the Digital product to get access to all No-Till Farmer content and archives online. Learn more about the different versions and what is included.
KEYWORDS 2016 benchmark study corn acres cover crop acreage Cover crop use crop acreage cropping changes small grain acres soybean acres