No-till saw increases across the board in terms of total acres and the percent of corn, soybeans and small grains managed under the practice.

No-tilled acres saw a significant increase among readers in 2016 in comparison to recent years.

Of the 740,000-plus acres farmed by No-Till Farmer readers who participated in the 9th annual No-Till Operational Benchmark Study, around 80% were managed in a no-till system last year, a nearly 7-point jump from 2015. This was also the highest percent seen since 2012’s 78.7%.

Other tillage practices saw a decline in overall acreage. Both strip-tilled and vertical-tilled acres fell by about 2 percentage points from 2015 to 2016, with 8.2% of acres under strip-till management last year and 5% that were vertically tilled.

There were also fewer readers using minimum tillage last year, at 23% compared to 30% in 2015. Those using moldboard plowing remained unchanged at 2%. 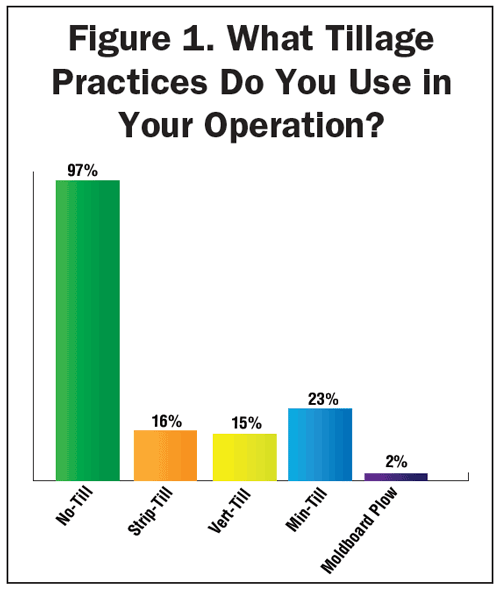 As no-till acreage picked up, so did the percent of corn, soybeans and small grains grown under the practice.

Premium content is for our Digital-only and Premium subscribers. A Print-only subscription doesn't qualify. Please purchase/upgrade a subscription with the Digital product to get access to all No-Till Farmer content and archives online. Learn more about the different versions and what is included.
KEYWORDS 2016 benchmark study minimum tilage no-till small grains no-tilled acres no-tilled corn no-tilled soybenas strip-till Vertical tillage

What I've Learned From No-Tilling: They Harvested 8,352 Acres Of No-Tilled Crops From 6,391 Acres