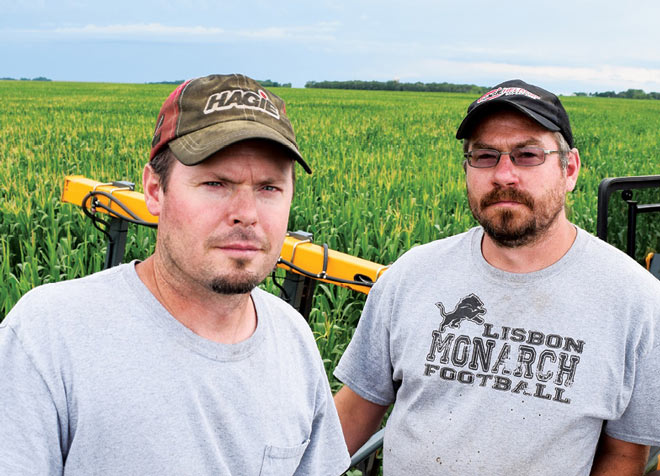 The Hoenhause family used to hear no-till wasn’t necessary in their area because there was ample moisture to grow a crop.

But more often than not, spring planting on their operation near Lisbon, N.D., was an adventure due to saturated soils that delayed field operations, muddied up the planter or caused a muddy harvest.

After cutting out tillage, adding cover crops and improving residue management, the Hoenhause farm — managed by brothers Mitch and Andy and their father Harvey — is producing similar or better yields than before no-till.

Seeding is feasible earlier in spring due to improved organic matter and soil structure, and they’ve been able to start reducing fertilizer application, much to the amazement of some neighboring farmers. Soil samples taken last November show organic matter levels have increased from 2-2.5% several years ago to 3-4% now, and as high as 5% in some fields this year.

With favorable weather this past fall, they cracked the 200-bushel mark on no-tilled corn for the first time, which is rare in their area.

“No-till didn’t look like it was better to start with, but as time went on it managed excess moisture,” Andy says. “We’re maintaining the same yield as before or maybe getting a little higher. We can do as good as a guy who is doing tillage, with less inputs.”

The Hoenhause farm supports three immediate families on 130 irrigated and 5,000 dryland acres, along with 2,500 acres of pasture.