Co-sponsors, along with No-Till Farmer... 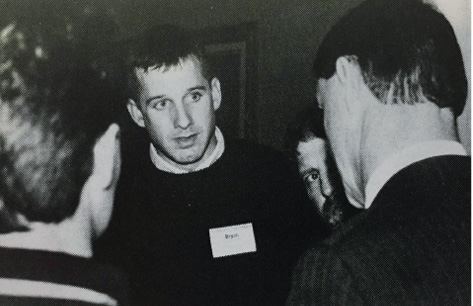 LOYAL ATTENDEE. Bryan Van Holton of Cole Camp, Mo., shares ideas with a conference speaker. He’s one of six no-tillers who have attended all 25 events.

Todd Intermill equipped a 6-row John Deere no-till planter with six Case IH offset disc openers. The Colman, S.D., no-tiller took one disc off each row, alternating them left and right with the new discs so the leading discs would not pull the planter to the side.

He removed all but one of the shims for the row units so the new opener would serve as the leading disc and sharpened the older discs. Intermill says the result is no hairpinning and he saved half the cost of replacing the disc openers.

Roundup would be an even more effective herbicide if it offered better plant penetration, says Lloyd Wax, a USDA weed scientist at the University of Illinois. However, it’s difficult to get enough glyphosate into the leaf where it can work.

Wax says the calcium, magnesium and sodium found in the water source cause most of Roundup’s ineffectiveness. He says the results are much better when ammonium sulfate is added to Roundup, as it removes the metal solvents, calcium, iron…