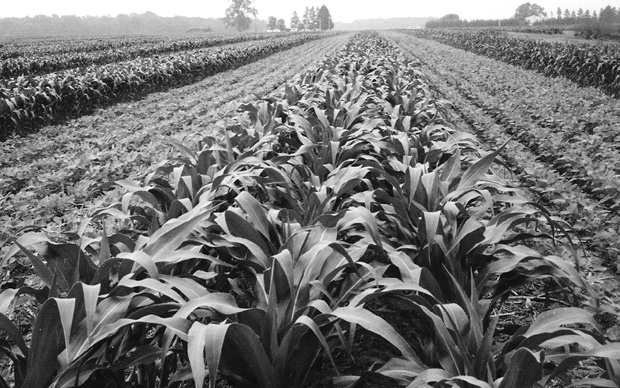 By Dan Zinkland posted on June 1, 2010 | Posted in Strip-Till Farming

No-tillers who strip intercrop often do so to increase corn yields — the result of exposing more outside rows of corn to the sun.

But Minburn, Iowa, no-tiller and ridge-tiller Craig Fleishman strip intercrops primarily to reduce erosion from water moving down the gently rolling hills on two of his farms.

“The strips break up the wind and the rain and the erosion that create gullies,” Fleishman says. “The 12 rows of corn slow the flow of water moving down between the hills.”

Fleishman divides the two farms into three blocks. He strips two of the blocks and no-tills the entire third block to corn. He moves the block of corn each year

“Neither farm is classified as highly erodible,” Fleishman says. “But we tend to get some gully washouts.

“It’s not practical to put a grass waterway in every spot where that could happen. The corn stalks in the strips break up the drainage pattern of the land.”

He started strip intercropping in 2000 and he alternates 12 rows of corn with 12 rows of soybeans. Fleishman plants the strips of corn first without GPS.

“I know where everything is,” Fleishman says. “You just go out there and plant. I go down the old rows.”

“You just have to be on your toes with conventional soybeans,” he says. “Roundup Ready, GPS and auto-steer make…