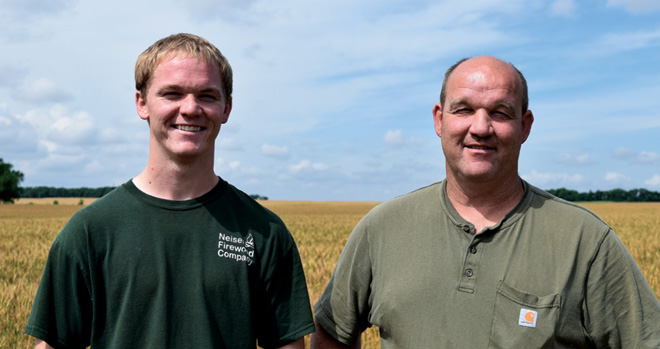 Pictured Above: BETTER SOILS. Ron Neises (right) and his son, Ethan, no-till about 2,600 acres of corn, soybeans, wheat, alfalfa and milo in southern Kansas, making the switch from a conventional system more than 20 years ago

While the weather in Kansas can be very fickle, Ron Neises has found switching to no-till practices 20 years ago has brought a calming influence, of sorts, to the 2,600 acres he farms in Belle Plaine, Kan.

Ron and his father were raising continuous wheat and plowing most of their acreage until they started dabbling with no-till around 1990. In 1996, when the Freedom to Farm Act was approved and they could raise whatever crops they wanted, they stopped plowing and began rotating corn, soybeans and wheat.

“As long as we were planting wheat, plowing was fine. But we just couldn’t make that work,” Ron says, noting they no-tilled corn and soybeans first before purchasing a no-till drill to seed wheat.

Ron, who farms with his son Ethan, says a major benefit of no-till has been a big reduction in erosion.

Their farm has a conservation plan and has always had waterways and terraces, but the loosened soils from tillage typically ended up in the waterways.

“Since we went to no-till we don’t clean waterways any more. We still must clean them where our neighbors are tilling, but not from my fields,” Ron says.