For Bruce Nelson, transitioning his farm to no-till wasn’t just about making adjustments to equipment, inputs or herbicides. It required a change in mindset that clashed with what he learned from his father and what he saw at surrounding farms.

But so far he’s seen improved water infiltration, increased soil organic matter and reduced equipment and labor costs on his southwestern Minnesota farm that have had a positive impact on his balance sheet.

“I said I would keep trying no-till as long as I don’t notice a yield drop, and so far I haven’t. So I’m still moving forward,” says Nelson, who no-tills mostly soybeans and spring wheat on 950 acres near Boyer Lake, Minn. “I farm by myself and when you’re doing full tillage that’s labor intensive.”

Nelson adopted reduced tillage on his farm in part due to encouragement from a friend at church who is a vocational ag teacher, and with assistance from the Becker County Soil and Water Conservation District (SWCD).

Nelson says he had to grapple early on with the physical appearance of no-tilled fields until he understood how no-till systems function differently than conventional farming. 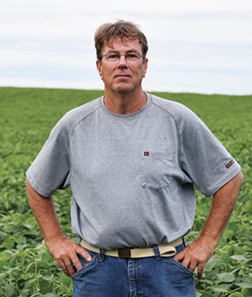 SWITCHING UP. Bruce Nelson converted his farm to minimum tillage a decade ago and now no-tills 100% of his soybean and spring wheat…

Ogallala Aquifer Summit a First Step — But What’s Next?