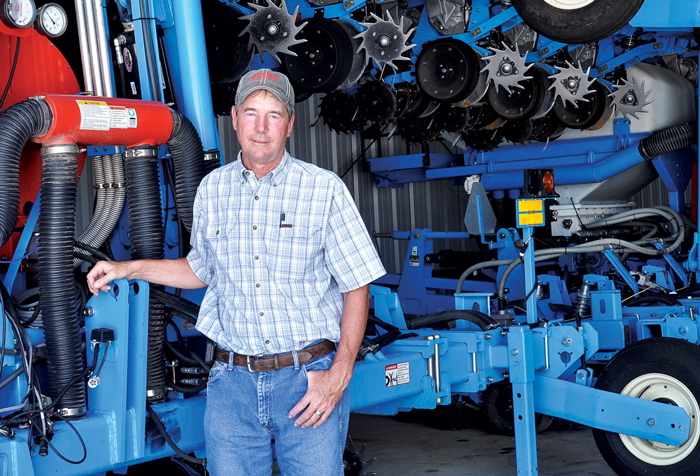 Pictured Above: TIMELY TRANSITION. In 2005, Palmer, Neb., farmer Clare Kurz permanently adopted strip-till to complement his twin-row system. The combination has helped increase corn yields by 20 bushels per acre and soybeans by 8-10 bushels on his 2,000-acre operation

Struggling to maintain yield consistency and mitigate erosion of precious topsoil, Clare Kurz adopted a twin-row system on his mostly irrigated 2,000-acre corn and soybean operation nearly 15 years ago. But the move was only part of the solution, as the Palmer, Neb., farmer also wanted a more efficient method to apply fertilizer and manage residue.

After experimenting with no-till, conventional tillage and ridge-till, Kurz turned to strip-till in 2005 to complement his twin-row setup. The permanent transition has helped improve nutrient uptake and water infiltration, reduced soil erosion and gradually increase both corn and soybean yields.

“We’ve put together a pretty effective system that helps make the most of our primarily sandy soils,” Kurz says. “It’s been a combination of banding fertilizer, reducing erosion and improving soil structure that has contributed to a 20-bushel increase in corn yields and 8-10 bushels per acre with soybeans.”

While making the move to twin-row has proven to be a good fit, it didn’t come without its initial challenges. Kurz prefers a crop rotation of 3 years corn followed by 1 year of soybeans, but managing corn-on-corn residue proved to be problematic.

“We switched from 36-inch singles to 36-inch twins, with our twin rows about 8 inches apart. Planting an average…