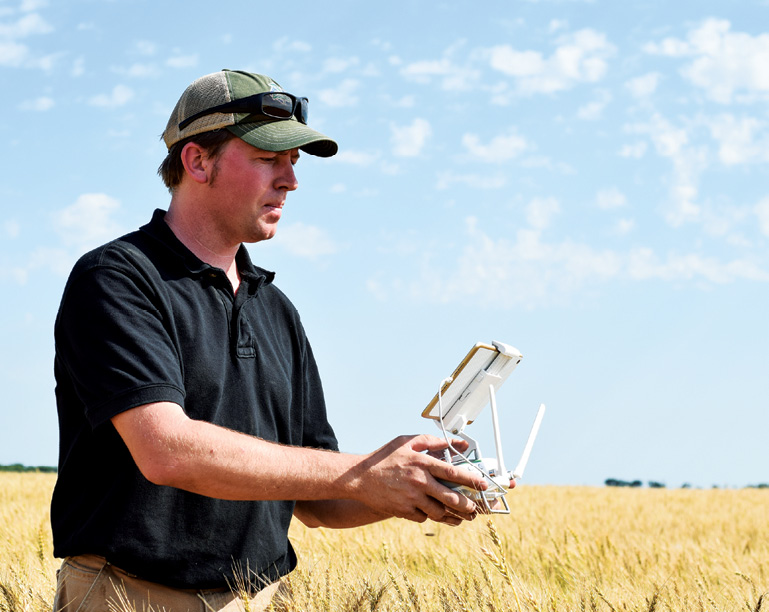 With a one-pass planting system, cover crops and a drone for scouting, no-tiller Jeremy Wilson is making the most of his fertilizer investment.

Pictured Above: LOOKING UP. Jamestown, N.D., no-tiller Jeremy Wilson enlisted a drone this past summer to help him scout corn, wheat and soybeans and tailor his management decisions more closely to real-time crop conditions. Wilson’s farm has been 100% no-till since 2001

For Jeremy Wilson, the road to raising consistent crops in a colder northern climate runs through improving soil health, rather than using iron to manage cropping challenges.

Even with a short growing season of 1,800-2,200 growing-degree days and only 18 inches of precipitation coming annually, the Jamestown, N.D., grower still manages to grow a fairly diverse range of crops and include covers in his operation.

While conventional farming wisdom says soils in colder climates need to be worked to warm up and dry out in spring, Wilson doesn’t subscribe to that. He’s walked his residue-covered fields as early as February and brushed plant matter aside to find earthworms still at work.

“Don’t let your soils see the sun,” says Wilson, who no-tills 4,500 acres of corn, soybeans, spring wheat and cereal rye. “We get really cold and wet, and we get hot and dry. No bare soil — that’s our goal.”

Wilson says his father, Randy, started to look into the practice as he dealt with some prolonged dry weather patterns. Eventually, they concluded tillage wasn’t producing…