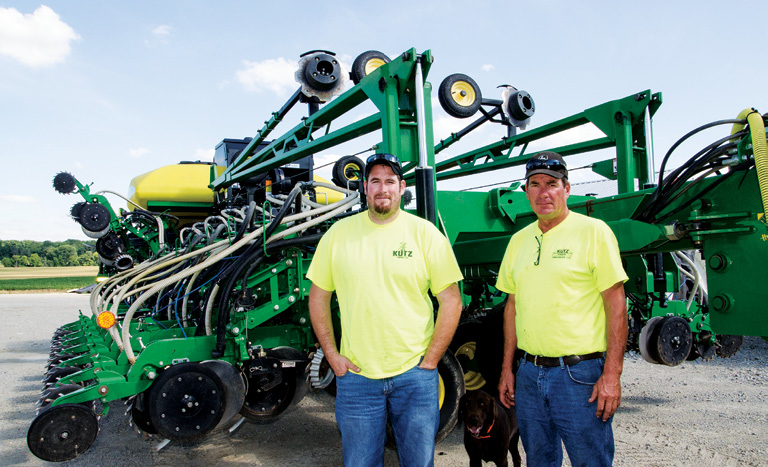 The Kutzes have continually tweaked their equipment and practices to achieve a level of production they didn’t think was possible.

Pictured Above: BUILT FROM SCRATCH. John (left) and Dennis Kutz built their John Deere DB60 24-row, twin-row planter, set to 30-inch spacings, from scratch. They say they wanted equipment that could better handle the different soil conditions they plant into

About 10 years ago, Dennis and John Kutz needed to trade planters and decided it was time to try something new. So the Fort Atkinson, Wis., father-and-son operation purchased a 12-row Great Plains planter and gave 30-inch twin rows a try.

“It was a way to go to narrower rows without changing a lot of equipment,” Dennis says.

They found the new row setup was not only successful for their corn and soybean crops, but it provided them a way to no-till their wheat behind corn.

A few years after they adopted twin rows, the Kutzes also began using cover crops, which allowed them to no-till their corn and adopt the practice on all of their acres.

Combining the practice of twin-row no-till and cover crops with their application of chicken litter, the Kutzes now have a system in place that’s protecting and improving their soil, while also helping them raise higher yields.

While the Kutzes were happy with twin rows, they felt they needed different equipment to better handle their variable soils. Without a suitable option on the market, they decided to build their own planter in the winter of 2013.

They started with a used, bare, John Deere DB60 toolbar and added Deere row units to…