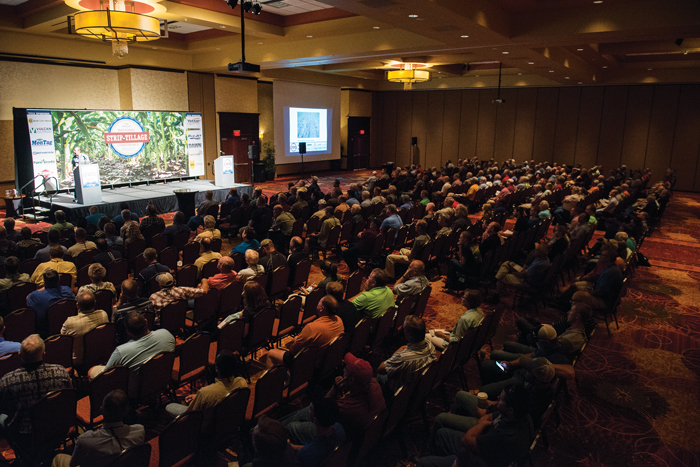 HELD IN ILLINOIS for the first time, the 2016 National Strip-Tillage Conference gathered a diverse group of strip-till farmers, researchers and industry experts from more than 20 states and abroad.

The event featured 19 presentations, 20 roundtable sessions and networking opportunities for attendees in Bloomington-Normal, Ill., to exchange valuable practices to try on their farming operations.

No-Till Farmer editors compiled some of the top takeaways for farmers to consider for their no-till and strip-till systems below.

One of the hottest topics at the conference was the practical use of cover crops in a strip-till system. Several presenters, including veteran Woodville, Ontario, strip-tiller Dustin Mulock, offered experience-based advice on how to best combine cover crops and strip-till.

“Contemplate when you want to do your strip-till pass,” Mulock says. “I see a lot of farmers making a pass after the cover crop is growing late in the fall. It’s my belief that at that point, we’ve already used the energy from the cover crop to push the roots down, to create the warm channels and the root channels.

“So to run through that cover afterward and destroy that work is one of the things that is a caveat so far in the industry.”

Mulock prefers to build his fall strips, plant a mix of covers that can include oats, barley, cereal rye and peas, and then let the ground rest until planting time.

Premium content is for our Digital-only and Premium subscribers. A Print-only subscription doesn't qualify. Please purchase/upgrade a subscription with the Digital product to get access to all No-Till Farmer content and archives online. Learn more about the different versions and what is included.
KEYWORDS bioreactor cover crops in strip-till National Strip Tillage Conference Ray Archuleta saving moisture tissue sampling

Highlights from the 2021 National Strip-Tillage Conference

From Seeds to Strips, Variety Goes the Distance