Shoot for Higher Organic Matter by Relying on Residue

While increasing organic matter is a multi-year process, no-tillers can boost it even faster by ensuring there’s enough plant material to replenish what’s already in the soil and adding more residue.

Despite making up only a small percentage of the soil — no more than 10%, according to the University of New Hampshire Cooperative Extension — organic matter plays a critical role in the soil’s health and the crops raised on it.

In a No-Till Farmer webinar, Doug Miller, agronomist and vice president of Erie, Ill.-based Midwest Bio-Tech, explained just why soil organic matter is so important, the factors that influence its formation and how no-tillers can help their levels climb higher.

One of the primary benefits of soil organic matter is its ability to hold onto nutrients.

“People that have higher organic-matter soils can have almost enough N available to produce the next crop,” he says.

Miller notes that 95% of N in the soil is held by the organic matter, while 90% of sulfur and 40% of phosphorus come from it. 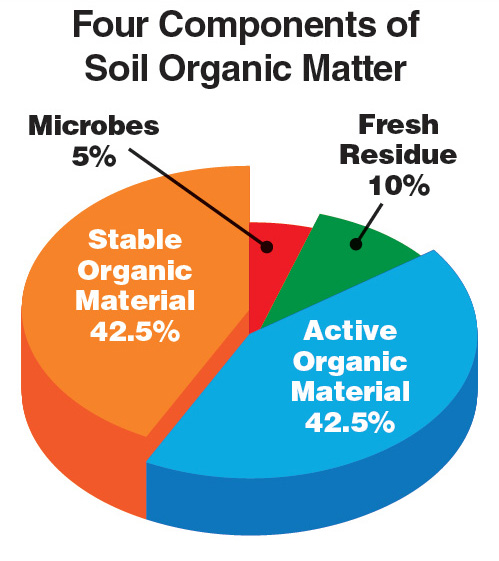 SMALL ROLE, BIG IMPACT. It may be the smallest component that makes up organic matter, but Doug Miller says microbes still play a crucial role. The vice president of Midwest Bio-Tech says they work to decay fresh residue, recycle nutrients to the next…

Premium content is for our Digital-only and Premium subscribers. A Print-only subscription doesn't qualify. Please purchase/upgrade a subscription with the Digital product to get access to all No-Till Farmer content and archives online. Learn more about the different versions and what is included.
KEYWORDS clay soils Doug Miller high organic matter manure Midwest bio-tech residue sandy soils soil organic matter

Can I Increase Soil Organic Matter by 1% This Year?