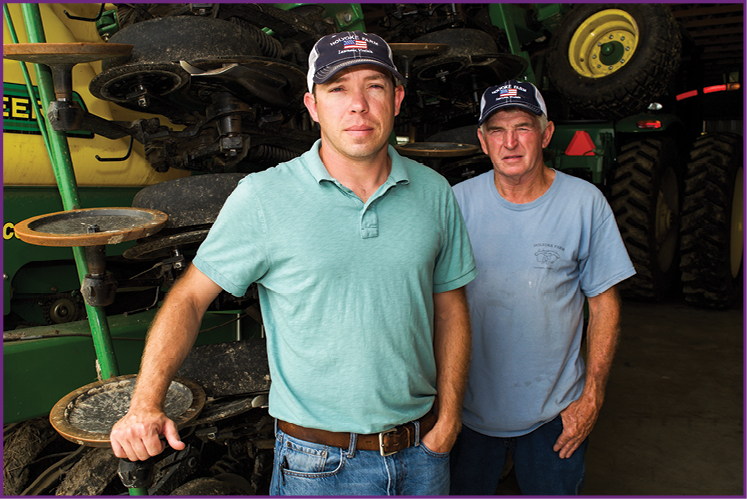 Ronnie and Dwight Forrester are improving nutrient efficiency and soil health on their Virginia farm with variable-rate fertilizer applications and diverse cover-crop mixes.

Pictured Above: BUILDING UP. Dwight Forrester (front) and his father, Ronnie, no-till 1,200 acres of corn, soybeans and wheat in eastern Virginia and are building up their operation with precision fertilizer applications and multispecies cover-crop mixes that include cereal rye, radish, rapeseed, Austrian winter peas and crimson clover

Cover crops aren’t exactly a new thing at Holyoke Farms, but they’ve taken on a renewed importance for long-time no-tiller Ronnie Forrester and his son, Dwight.

With the threat of environmental regulation seemingly always looming in the Chesapeake Bay watershed, the Forresters are taking care of business on their operation by seeding cover crops behind corn and soybeans to improve soil health and reduce erosion.

Dwight — a soil conservationist for the NRCS office in Tappahannock, Va. — and his father raise about 60 head of Angus cattle and no-till approximately 1,200 acres of corn, full-season soybeans and double-cropped soybeans and spring wheat near Kilmarnock in eastern Virginia.

Due to weather issues and prices, they’ve been scaling back on small grains and shifting to full-season soybeans in the spring behind cover crops.

“I want to try to improve my soils and saw it as a perfect opportunity to put more money into the crops and go to corn and soybeans and do multispecies cover crops,” Dwight says, also noting that eliminating erosion is an important goal in regards to farming in the Chesapeake Bay area.

This year, the Forresters raised 650 acres of corn, 300 acres of full-season soybeans and…