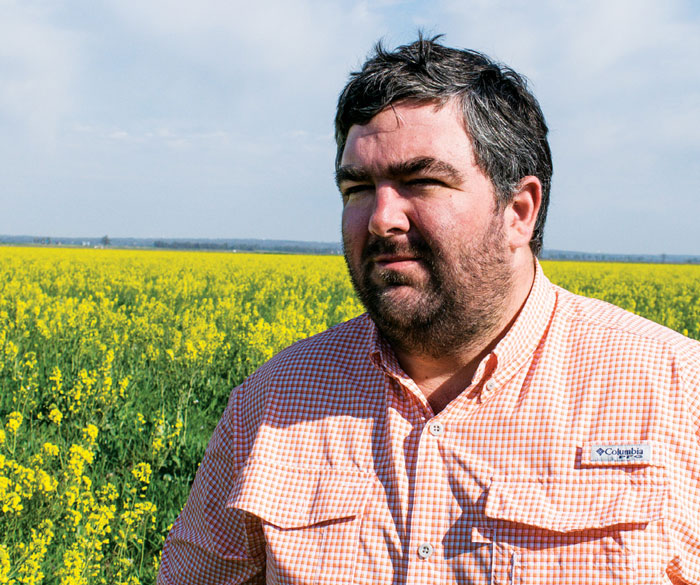 After nearly going broke with heavy tillage and weathered soils, Johnny Hunter is staking his farming future on planting green.

Pictured Above: NEW START. Johnny Hunter is taking a leap of faith, replacing a system of intensive tillage and furrow irrigation in the Missouri Bootheel for a model that focuses on rebuilding soils, ‘planting green’ and reducing irrigation. “We’re starting with the basics by cutting out the tillage and keeping the ground covered for as many days out of the year as possible,” he says

The journey Johnny Hunter is taking isn’t for the faint of heart. It started during the summer of 2012, when a historic drought blasted the Missouri Bootheel and much of the U.S.

Hunter, who has been farming on his own since 2006, was irrigating but raised his worst crops ever that year. He’d been able to raise 200-bushel corn and 70-bushel soybeans in good years, but the numbers weren’t adding up in his favor.

Even though his farmland near Essex, Mo., sees 50 inches of annual rainfall, most growers in that area use raised beds, cultivation and furrow irrigation for crops. Hunter attributed his losses that fateful year to a lack of water infiltration from years of discing, field cultivating and landplaning.

“It really scared me because I always thought irrigation could save me from anything. But it didn’t,” Hunter says.

One Saturday, he started watching YouTube videos about cover crops and a presentation by NRCS soil health expert Ray Archuleta.

Hunter was moved enough to contact Archuleta and he called the next day. They talked for an hour and Hunter decided to make big…

Premium content is for our Digital-only and Premium subscribers. A Print-only subscription doesn't qualify. Please purchase/upgrade a subscription with the Digital product to get access to all No-Till Farmer content and archives online. Learn more about the different versions and what is included.
KEYWORDS CDS-John Blue Cover crops dawn zrx furrow runner John Deere Planter Johnny Hunter reducing tillage roller-crimper

Taking the Next Step with No-Till