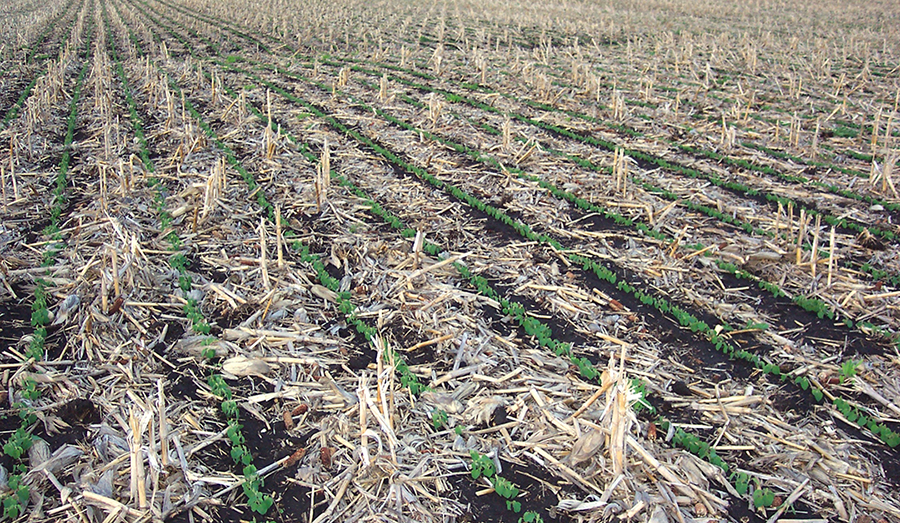 By Dan Zinkland posted on February 1, 2010 | Posted in Strip-Till Farming

Using 30-inch rows in strips could lead to higher yields, lower seed cost, less disease and a boost in profitability

While most of the attention in strip-till gets paid to corn, there are some growers who are successfully strip-tilling soybeans.

Veteran strip-tiller Jeff Reints of Shell Rock, Iowa, and more recent strip-tiller Bruce Wichmann of Fairfax, Minn., have each tried strip-tilling soybeans in the spring and say they are pleased with yields and profitability. Both of them created large test plots comparing spring strip-tilled soybeans with no-tilled soybeans.

Reints has been strip-tilling for 10 years, and 2009 was the first year he strip-tilled soybeans. He typically no-till drills soybeans on 10-inch spacings. He says no-till works well on fields with light and variable soils and on the steep hillsides of his north-central Iowa fields.

But a combination of factors in 2009 led Reints to see how spring strip-tilled soybeans would work.

Planting soybeans rather than drilling enabled Reints to reduce seed populations from 190,000 seeds per acre in 10-inch, no-till-drilled soybeans to 150,000 per acre for strip-tilled soybeans in 30-inch rows. That saved $16 an acre.

Strip-Tillers Putting Manure In Its Place