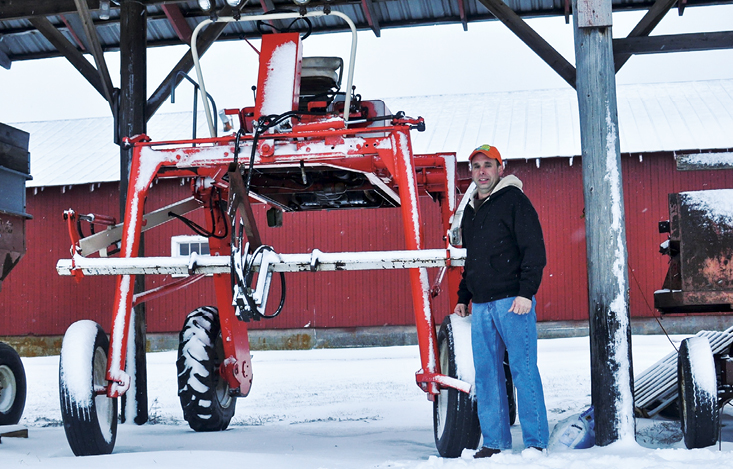 After adopting no-till 100% and an aggressive cover-crop program, Darrell Shover has watched his yield averages steadily increase, even during challenging weather conditions.

Pictured Above: INTERSEEDING GOALS. Indiana no-tiller Darrell Shover is working on interseeding cover crops into corn with this detasseler he bought at an auction. He still has some tweaks he wants to make to it, but he did get a good stand of barley and cereal rye that was seeded into 6- to 8-foot-tall corn last year. He prefers to interseed his cover crops instead of flying them on, as he doesn’t always get a good cover crop stand from the airplane

Most growers prefer to test the waters before diving straight into 100% no-till with cover crops.

But Darrell Shover decided to do just that with the influence of his father-in-law, Keith Miller, and the opportunity to participate in the EQIP program. Six years ago he gave up tillage for good and had cover crops flown on nearly every one of his 600 acres in Syracuse, Ind., that fall.

That 180-degree turn in management has paid off. Shover, who admits he never kept good records or paid much attention to his field management, watched his average corn yields go from 130 bushels per acre to the 150- to 160-bushel range. Last year he had some fields break 200 bushels, which he says he normally doesn’t see.

Even during the drought in 2012, Shover’s corn reached 140 bushels, which was above average for him.

“I couldn’t get it planted in a timely fashion when everyone else did,” he recalls. “The no-till sure made a difference. It was able to hang…

Premium content is for our Digital-only and Premium subscribers. A Print-only subscription doesn't qualify. Please purchase/upgrade a subscription with the Digital product to get access to all No-Till Farmer content and archives online. Learn more about the different versions and what is included.
KEYWORDS 2012 drought burcucmber Corn yield darrell shover interseeding cover crops John Deere 7000 muck soils non-gmo corn