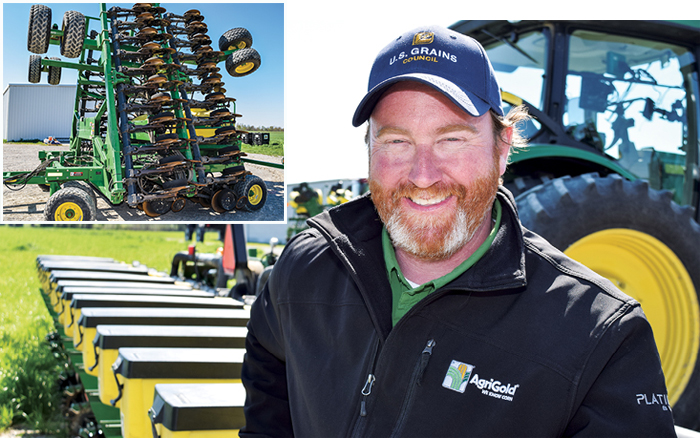 Rebuilding Soil from Years of Tillage with No-Till, Covers

Pictured Above: LESS IRON. After making as many as four tillage passes in a growing season, Peter Rost Jr. no-tills 3,500 acres of corn, soybeans and wheat near New Madrid, Mo., and seeds cover crops through most of his rotation. He recently added Martin closing wheels to his John Deere 1720 MaxEmerge planter (inset) to help close the seed slot in heavier soils

WHEN IT COMES to adopting no-till, the teachable moment for Peter Rost Jr. came 3 years ago.

After grading his fields and planting corn in 2013, heavy rains came and were followed by windstorms that whipped through southeastern Missouri. Sand blowing over the soil surface burned Rost’s emerged corn.

Rost remembers his AgriGold agronomist being amazed at the blowing sand as they scouted fields that spring.

“I looked him in the eye,” Rost recalls, “and said, ‘This will never happen again.’”

Times have certainly changed for the New Madrid, Mo., grower, who in the span of 3 years is no-tilling 100% of his corn, soybean and rice acreage and seeding cover crops on the majority of the acres he farms with his father, Peter Rost Sr. About half of their acreage is irrigated.

Rost would routinely make a fall tillage pass on most fields, and another three passes in the spring before planting. He’s always done some no-till, such as with soybeans planted in the river bottoms, but he’s gradually phased in no-tilling corn and rice and seeding covers.

“I would love to cut out irrigation, or…