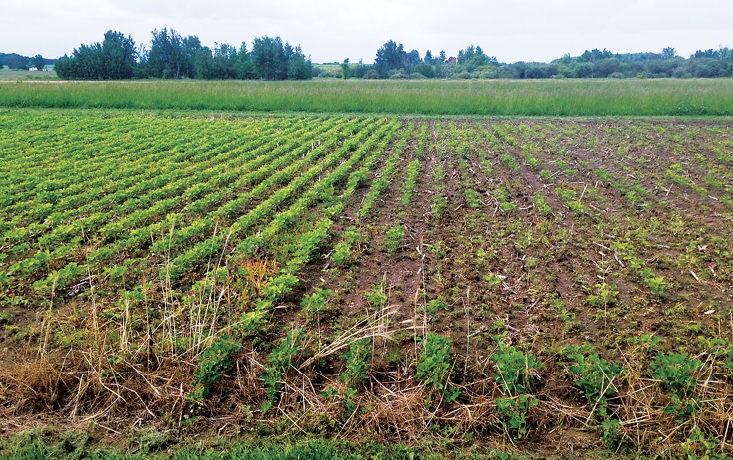 Through a series of experiments and trials, a Wisconsin agronomist is proving no-till and cover crops not only work, but offer proven benefits in northern climates.

Pictured Above: SIDE BY SIDE. Jason Cavadini and his research team at the University of Wisconsin’s Marshfield Research Station drilled soybeans into a field that was no-tilled and seeded with cover crops on one half (left) and conventionally tilled on the other half (right). The soybeans on the no-till/cover-crop half had a taller, more uniform stand. Cavadini believes the no-tilled soil may have responded better to moisture stress, as they had received significant rainfall

Growing up in the Coon Creek Watershed of La Crosse County, Wis., where soil conservation originated, Jason Cavadini watched his family successfully adopt and commit to no-till on their farm for over 10 years.

But after becoming assistant superintendent and agronomist for the University of Wisconsin’s Marshfield Research Station in central Wisconsin, he was surprised to find that no-till wasn’t a common practice in that region.

“I asked why no one was doing it,” he told attendees at the Wisconsin Discovery Farm’s Nutrient Management conference last December. “And there were a lot of very valid reasons why people weren’t doing it. But being at the research station, I saw that as an opportunity to figure out how we can make no-till work — even in the challenging conditions.”

Cavadini shared some of the no-till projects the Marshfield Research Station has been working on the past couple years, and some of the keys to making no-till work in the cool, wet climate of central Wisconsin.

Cavadini believes one of the main obstacles for making no-till…

Premium content is for our Digital-only and Premium subscribers. A Print-only subscription doesn't qualify. Please purchase/upgrade a subscription with the Digital product to get access to all No-Till Farmer content and archives online. Learn more about the different versions and what is included.
KEYWORDS cool wet soils forage cover crops jason cavadini Northern climates Posi Close Wheels prostitch closing wheels