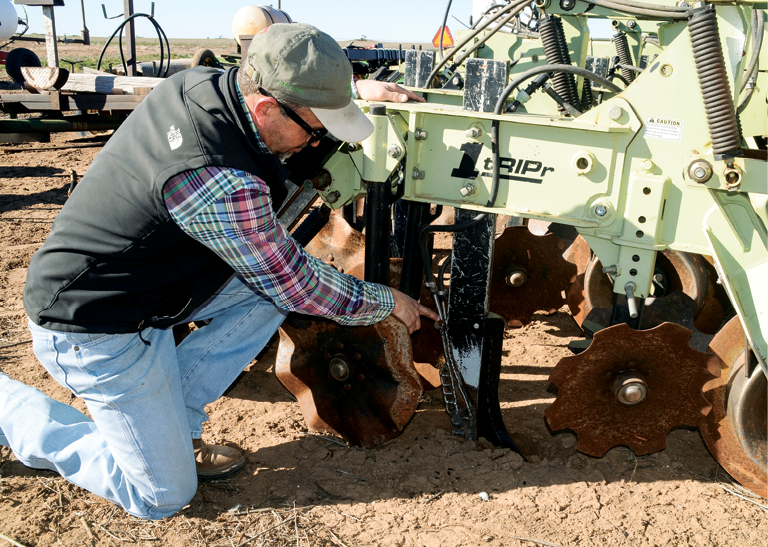 Harold Grall credits good records, strip-till and new technology for his ability to double his farm size while cutting fuel and irrigation water.

Pictured Above: FREQUENT UPKEEP. Texas strip-tiller Harold Grall points to hardfacing on the shanks that is replaced twice a season because of their extensive time in the field. The two Orthman 1tRIPrs Grall uses are both equipped with fertilizer tubes for pre-plant mixtures and anhydrous ammonia application

Harold Grall already had extensive experience growing corn and grain sorghum in the Texas Panhandle when he bought out his mentor, Dale Coleman, and started farming on his own in 1994. At that time, he was farming 3,700 acres of High Plains silt-clay loam just north of Dumas, Texas, and was committed to ridge-till and furrow irrigation.

Today, he and his wife, Stacey, strip-till Hasta Farms’ 8,600 acres of land and have fine-tuned the operation to 90-93% continuous corn growing under 26 center-pivot irrigation systems — 10 of them half-mile-long, full-section rigs.

Grall says while he’s farming nearly twice the land today, he burns about 70% of the diesel fuel he used in the late 1990s.

Premium content is for our Digital-only and Premium subscribers. A Print-only subscription doesn't qualify. Please purchase/upgrade a subscription with the Digital product to get access to all No-Till Farmer content and archives online. Learn more about the different versions and what is included.
KEYWORDS Continuous corn fuel savings Harold Grall Hasta Farms irrigated strip-till Orthman 1tRIPr rig Texas strip-till

Banding Vs. Broadcasting Nutrients In Strip-Till: Which Is Best?