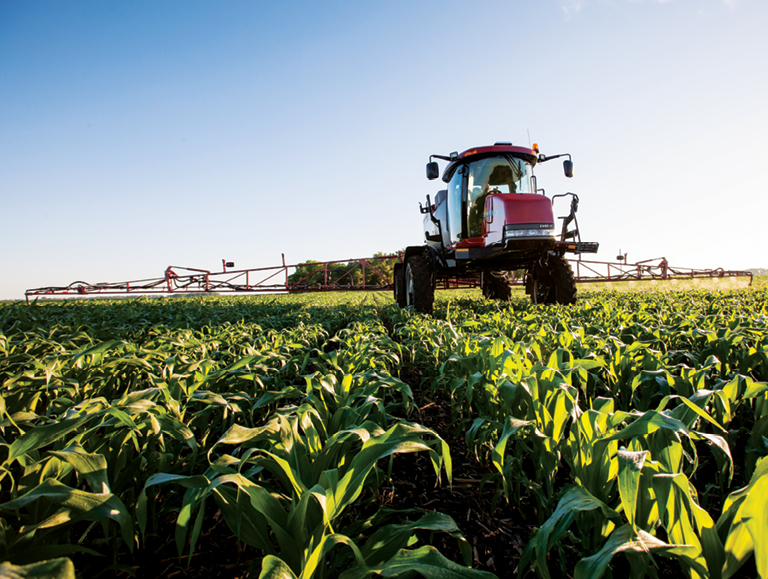 Pictured Above: PRECISE APPLICATION. The individual nozzle control system on board this sprayer is capable of turning nozzles on and off to prevent skips and overlaps automatically across the boom width at field speeds well above 12 mph.

Preston’s fields are located between creeks and timber, and back up to ever-growing residential areas near Elizabethtown, Ky.

“In addition, we’re fighting glyphosate-resistant weeds that have to be controlled in a timely fashion, so sprayer efficiency is a must,” he says.

With many non-farmer neighbors, Preston is also quite concerned with reducing drift to prevent damage to yards and gardens that border his fields.

He grows corn, soybeans, wheat, rye, grain sorghum and canola on irregularly shaped fields, many of which are 15-20 acres in size, and include grassed waterways that have to be protected from herbicides. About 90% of his operation is no-till.

In southeast Minnesota near Spring Grove, Myron Sylling and his brother Mikal have more unobstructed fields than Preston, but non-GMO weed control applications on their 1,300-acre corn and soybean seed operation were presenting a yield drag because of overlapped spraying, which resulted in plant stunting.

“We had a fair amount of overlap in turns with our seven-section, 90-foot boom, and the non-GMO chemicals were causing chemical burn and stunting, particularly on soybeans,” Sylling explains.