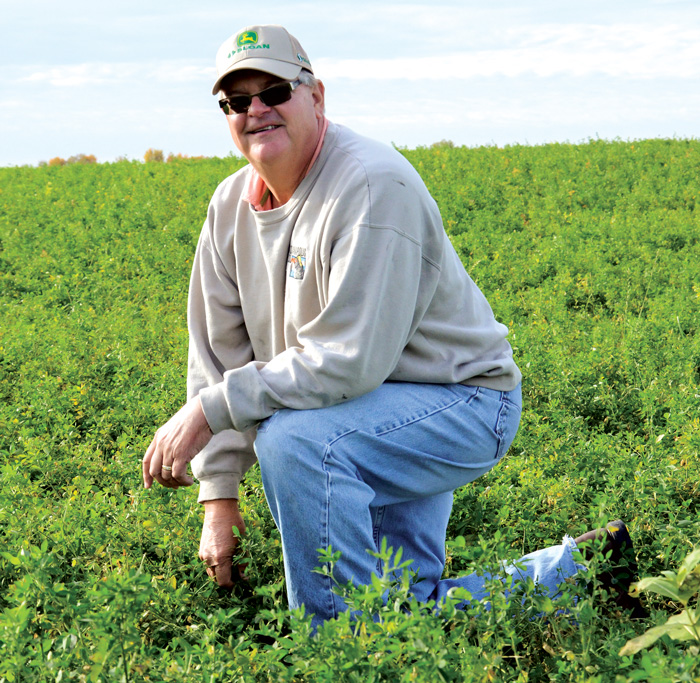 Above photo: NATURAL PLOW. When Norm Deets acquires a new farm that hasn’t been no-tilled, he grows alfalfa for 4-5 years to improve the tilth of the soil, saying it works as a “natural plow.” He’ll then no-till corn after alfalfa, as he can take a 100-pound nitrogen credit from what’s left in the soil.

Being the “scourge” of the neighborhood was one of the biggest challenges Norm Deets faced when he started no-tilling. But after 30 years of committing to the practice, he knows the benefits outweigh the nice look of perfectly tilled soils.

After watching his dad, Omer, adopt no-till in 1981, Deets made the commitment on his own 500-acre farm in Milledgeville, Ill., 4 years later to prevent erosion.

“We originally did it for conservation,” he says. “We’ve learned over the years there are a lot more benefits with no-till than conservation, but that’s why we started.”

Those added benefits included savings in terms of time, labor and tillage. Since he was also the chief operating officer at CGH Medical Center in Sterling, Ill., Deets could farm on the side while working full time. And without tillage equipment, Deets found additional savings in equipment, maintenance and storage.

Now farming full-time, Deets has continued to improve his no-till program by adding alfalfa, tweaking his fertility program and introducing cover crops to his corn-soybean rotation.

In those beginning years of no-tilling, Deets learned how to adjust his management to accommodate for the absence of the plow.