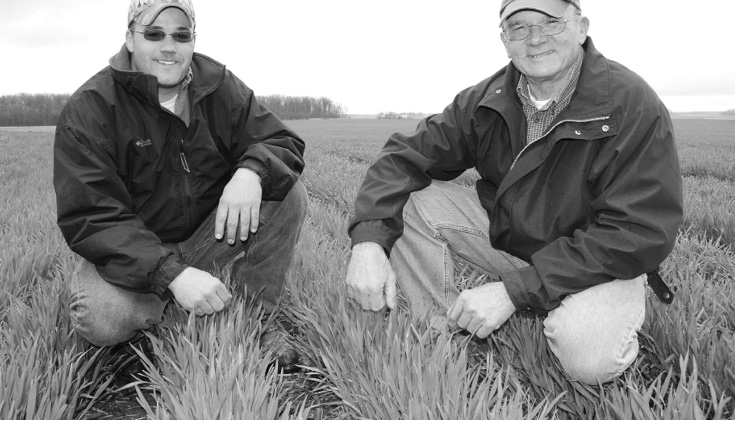 “I can't get my wife to no-till the garden,” laments Bill Coppess while walking through the family tomato patch on the way to one of his residue-covered, Ansonia, Ohio, wheat fields.

A no-tiller since 1988, Coppess and his son, Jeff, rotate corn, soybeans and wheat. Bill mostly handles the spraying with their self-propelled Patriot sprayer, while Jeff plants all the crops with a Kinze planter.

Jeff, the seventh generation to raise crops on the eastern Ohio farm, is proving true to his farming pedigree. Since returning in 2000, Jeff has chipped in more than just labor. From equipment to cropping rotations, his ideas are helping take the 1,400-acre family operation to the next level.

Bill had single coulters on his planter when he started no-tilling, and eventually moved to a Rawson three-coulter system. But at a conference, Jeff learned that coulters may not be the best tool for all environments.

“We were always having depth-control problems,” says Bill, noting clay is susceptible to crusting and that getting even down pressure and keeping the planter parallel to the ground was a challenge with coulters.

Bill purchased a second planter when making the switch to 15-inch corn rows in 2000, so Jeff decided to experiment by taking the coulters off one planter.

“I called Dad and told him to come take a look,” Jeff recalls. “The planter was doing a perfect job of planting and the ground was harder than a rock. We ended up taking the coulters off the…