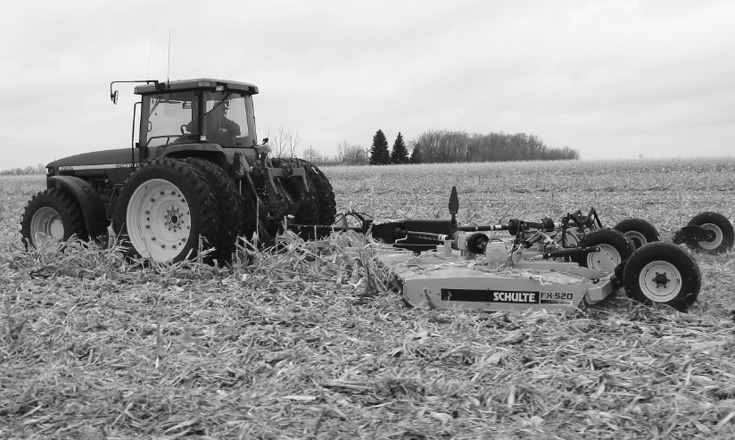 With the aid of a rotary cutter, tough Bt corn stalks and dense wheat stubble no longer pose a problem for a South Dakota no-tiller

Planting corn into corn was a nightmare, recalls Don Hoeksema of his 2007 planting season.

“We didn’t have much trouble placing the seed, but the tall corn stalks would rip off monitor wires and fertilizer lines. We even broke a couple of drive chains on the planter boxes,” says the Platte, S.D., no-tiller.

Hoeksema; his father, Jim; and son, Andrew, spent the summer kicking around ideas for how to deal with the residue the next year. Hoeksema stumbled across the answer at the Dakotafest farm show.

“I saw this 20-foot mower and thought it was cool, but it wasn’t until I was driving home that it dawned on me it might be what we need,” Hoeksema says. “I thought it would chop up the stalks, get them better dispersed and laid out in finer pieces.”

Jim was pretty receptive of the idea, but Andrew took some convincing. Finally, with everybody on board, they purchased a Schulte FX 520 20-foot rotary cutter in October 2008.

They mowed all the corn acres on the 1,200-acre farm throughout the winter as weather permitted, mowing some fields right before planting.

“It leaves about a 4- to 6-inch stalk and disperses the residue fairly evenly where we mow,” Hoeksema says. “It drops the residue in the same place it was cut from.”

On a dry day, Hoeksema says the mower chops residue into fine pieces, while it chews up the residue more on high-moisture days, making it look “raggy.”

Ridge Till Continues To Gain Popularity