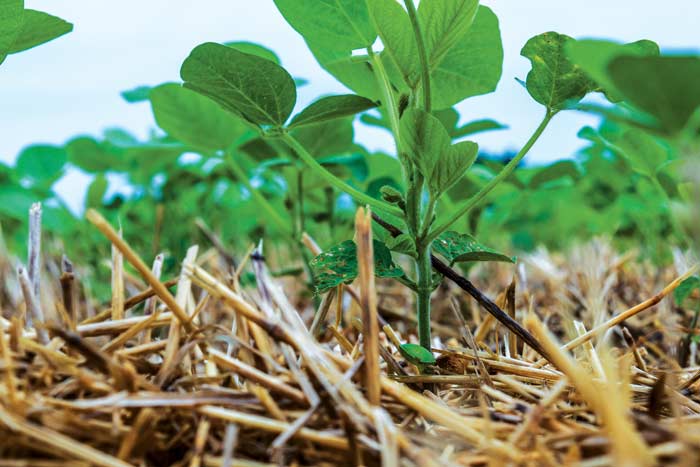 ABOVE PHOTO: SOIL COVERED. Although Craig Brann doesn’t seed cover crops, he does get plenty of soil cover from double-cropping soybeans into wheat. With the addition of double-cropped soybeans, organic matter levels have improved from about 1.5% across the farm in 1999 to about 2% on average now.

Surrounded by two major rivers and the Chesapeake Bay watershed, Craig Brann likes to say he “farms on a sandbar” in eastern Virginia.

But he’s found a diverse rotation, split nutrient applications and precision seeding and planting allow him to run a profitable, efficient long-term no-till operation that doesn’t punish the environment.

Improving soils has been a major goal, and while Brann’s fields don’t have high levels of organic matter, levels have still improved from about 1.5% 10 years ago, when he started no-tilling, to as high as 2.5-2.8%, with an average of 2% across the farm, he says.

Brann knows that no-till practices have improved his farm’s soil quality because he learned what to look for while working as the district manager and conservation specialist for the Northern Neck Soil and Water Conservation District from 1999-2009. He still owns a rotary hoe but hasn’t used it in decades, and he no longer does any subsoiling.

“I think subsoiling works and has its place, but it seems I always did it at the wrong time, or it got wet after I did it. Then I’d plant corn and it made even more tracks and it was worse than before subsoiling it,” says…

Premium content is for our Digital-only and Premium subscribers. A Print-only subscription doesn't qualify. Please purchase/upgrade a subscription with the Digital product to get access to all No-Till Farmer content and archives online. Learn more about the different versions and what is included.
KEYWORDS air drill Chesapeake Bay cleansweep Craig Brann John Deere Precision Planting split nitrogen application tramlines

How the Rhizophagy Cycle Could Boost No-Till Profits