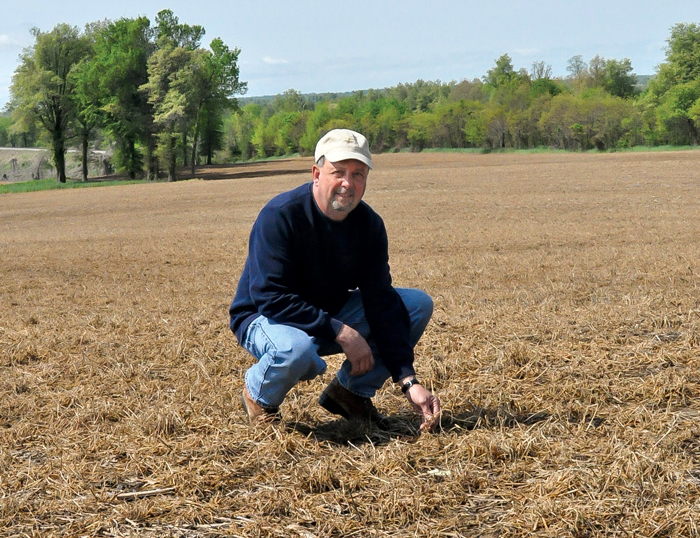 No-tiller Davie Stephens is planting thicker, narrower rows to get the most out of every acre, while protecting his highly erodible land.

FOCUSED COVERAGE. Davie Stephens adopted cereal rye as a cover crop on his farm several years ago when the EQIP program became available. Today, he focuses on seeding cereal rye in areas that are the most prone to washing and erosion. He says if he doesn’t get the cover burned down in time before corn, he can run into trouble.

Like most growers, Davie Stephens wants to get the most out of his farm. The Clinton, Ky., corn and soybean no-tiller moved to 20-inch rows in the mid 1990s to ramp up planting populations, and is working with different companies to test prescription services to determine what planting rate fits each farm best.

The adoption of no-till began with Stephens’ father, Jimmy, around the late 1970s and early 1980s. A couple years after Stephens began farming with Jimmy in 1988, the two went to 100% no-till.

“We got into it because we saw the benefits it provided to the soil,” Stephens says.

His father raised wheat when he was a kid and would take the moldboard plow to turn the wheat stubble under for double-cropped soybeans.

“Back in those days you’d work the ground to plant the wheat, and then you’d take a moldboard plow and plow the stubble under,” he says. “It was amazing the erosion that could happen…

Adapting to Mother Nature with No-Till, Populations and Fertility